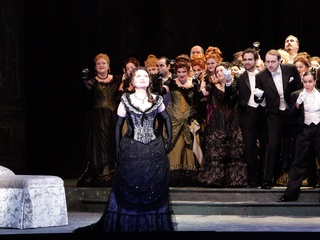 Albina Shagimuratova reigns on the Wortham stage in La Traviata, but the movement of the chorus was distracting.   Photo by Felix Sanchez 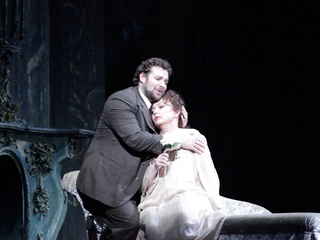 Bryan Hymel, in a scene with Albina Shagimuratova, was a last-minute addition after David Lomelí bowed out, but he rose to the occasion. Photo by Felix Sanchez

Sometimes a night at the opera is A Night at The Opera. I don’t mean in the sense of that 1935 Marx Brothers film. I’m thinking more of Queen’s fourth studio album, even if it was inspired by the classic comedy and recorded exactly 40 years later. The record, a landmark of my high school years, embodies the grandeur of love, sex, death, and irony on two sides of vinyl, all of it filtered through Freddie Mercury’s unforgettable voice.

In the case of Verdi’s La Traviata, the same unfolds in three acts (the second act in two scenes) and Friday night at Houston Grand Opera the unforgettable voice belonged to Russian soprano Albina Shagimuratova as Violetta Valéry. Program notes describe her as “today’s reigning Queen of the Night” in Mozart’s Die Zauberflöte. She certainly reigned on the Wortham stage, Mozart or not, winning a heady standing ovation at the curtain call.

If you saw her last year in HGO’s Lucia di Lammermoor, you know the experience. Shagimuratova’s Verdi, however, is just as thrilling as her Donizetti, perhaps even more.

American tenor Bryan Hymel did more than just step in at the last moment, giving a deeply passionate performance that didn’t appear the least bit under-rehearsed.

The production was hit with complications this week when Mexican tenor David Lomelí became ill and failed to make his HGO debut in the role of Alfredo Germont. First place winner in Plácido Domingo’s 2006 Operalia competition (in the opera and zarzuela categories), his performance was eagerly anticipated. American tenor Bryan Hymel did more than just step in at the last moment, giving a deeply passionate performance that didn’t appear the least bit under-rehearsed.

Such last-minute disasters, common on the operatic stage, have two effects. Either they disrupt everything and bring down the ship, or they serve to invigorate the rest of the cast members, making them more engaged. Opening night of this La Traviata was most definitely the latter.

As I walked down the stairway into the theater, I couldn’t help but notice the elegant installation of sculptor E.V. Day’s Violetta floating overhead. The work is one of 14 in a series aptly titled Divas Ascending, all fashioned from costumes in the New York City Opera’s archives.

Violetta is a fascinating manifestation of lace and hoop, extended by breaking the dress in half and ripping out the lining, then suspending it high in the air. I hoped it would be a clever foreshadowing of the production, with the essential nature of Verdi’s opera still there, but somehow more deeply investigated and framed in a fresh way for contemporary audiences.

The unimaginative production is the only disappointment of this otherwise thrilling La Traviata. British set and costume designer Desmond Heeley has provided a look that suggests everything has been scraped together from other companies’ yard sales and certain visual metaphors come off as little more than hackneyed. By way of example, there’s a crooked hanging chandelier in the first act that sits covered in a white sheet on the floor in the third. Oh, it’s just like Violetta, the fallen woman!

The second act garden scene looks a little like it wants to be a Cocteau film, but the bright blue lawn furniture kind of ruins that idea. Heeley’s costumes are lavish, to be sure, with intricate corsets and sumptuous fabrics. But some are downright gaudy and appear in colors that either bleed into the monochromatic sets or create a visual dissonance next to them.

British set and costume designer Desmond Heeley has provided a look that suggests everything has been scraped together from other companies’ yard sales and certain visual metaphors come off as little more than hackneyed.

Often I’ve singled out HGO for its thoughtful attention to movement in opera staging, particularly by the chorus. Choreographer and assistant director Tim Claydon’s choices here suggest that he has a distant Bob Fosse master-class under his belt, but this wasn’t really the place to show off what he learned. All that’s missing is a bowler hat.

It’s nice that he’s thought of the chorus as a unified, single-moving entity, but it doesn’t succeed. The hokey swaying back and forth during the first act Drinking Song is especially distracting, not only for the viewer but for tenor Hymel, who has to complete with it for attention.

Opera production, to my eyes, is presently in a somewhat muddy period. The great heyday of post-modern anachronism and visual insult looks quaint, in a way, to 21st century audiences. We no longer need to see Violetta rethought as a pole-dancer in Bangkok in order to gather some statement about the “global” nature of her ruined romance.

That said, we’ve come to expect wild creativity from HGO, especially when it comes to the warhorses of the repertory. This production actually reminds me of the early days of my opera-going experience, when sets and costumes were dusty and unremarkable, and when many singers barely worried about blocking. They relied on their singing to win applause.

Fallen production aside, there is more than enough extraordinary singing here to satisfy. Shagimuratova changes voice and character as necessary to the action unfolding in each act, from a party gal at the beginning to a vulnerable wisp of half-dead beauty at the end. Hymel has an appealing Italianesque break that he uses to great dramatic effect throughout.

Giovanni Meoni (making his HGO debut as Giogio Germont) has a commanding baritone and certainly looks the part of the demanding father. Watch him milk applause at the curtain call, it's charming. Catherine Martin as Flora and the charismatic Brittany Wheeler as Annina brighten some of the darker corners.

Artistic and music director/conductor Patrick Summers has achieved an admirable integration of orchestra and singers, likely the finest I’ve heard since I moved here two years ago.

Albina Shagimuratova reigns on the Wortham stage in La Traviata, but the movement of the chorus was distracting.   Photo by Felix Sanchez