Behold: The world's most expensive tequila comes to Houston

Behold: The world's most expensive tequila comes to Houston 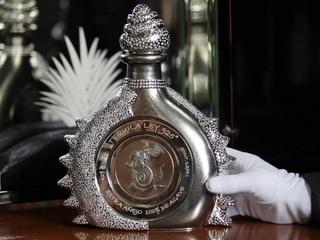 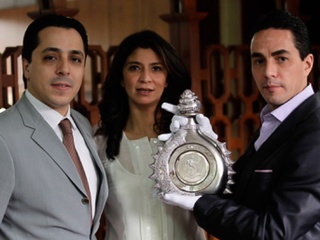 What makes a $3.5 million dollar bottle of tequila so expensive?

It's not so much what's inside (supposedly 1.3 liters of a seven-year-old, 100 percent agave tequila distilled by Hacienda La Capilla) that counts, but on the outside: An astounding 4,000 diamonds, weighing in at 328 carats, set into a five-pound platinum bottle.

That one-of-a-kind piece, designed by Mexican artist Fernando Altamirano of Tequila Ley .925, is aptly named "The Diamond Sterling." And it's for sale.

After the bottle's great reveal in late 2010, it was scheduled for a tour of European and Middle Eastern capitols before auction.

If sold, it will usurp the title of the "The World's Most Expensive Bottle of Tequila," an honor that Altamirano also held in the Guinness Book of World Records for a platinum and white gold tequila bottle sold at auction for $225,000 in 2006.

The bottle will be displayed to potential buyers in Houston at Spec's Superstore Downtown, on Thursday from 2 p.m. until 8 p.m. and Friday from 11 a.m. until 8 p.m.

Though guests won't be able to sip out of the pricey vessel, Spec's will offer tastings of other tequilas within gazing-distance of the jewels.

But if you're just looking for a quality, swanky tequila to sip on, there are a handful of other options that are more within a more approachable price range — Gran Patrón Burdeos, for instance, costs just $649, and Don Julio Real falls in at $350.