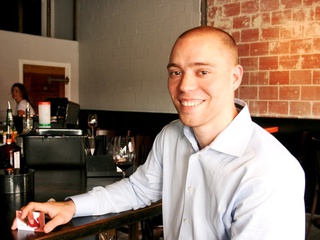 Bobby Heugel Photo by Katharine Shilcutt/Flickr
The iconic gay bar Mary's is being sold for a parking lot, but new owners plan to save the main building

When rumors first started floating a few months ago that the owners of Anvil Bar & Refuge planned to buy the lot across the street from the new beer bar and restaurant they’re building, the LGBT community feared the worst: That the historic Mary’s, Naturally would be paved over for a parking lot.

Anvil co-owner Bobby Heugel said at the time: “If we were to buy it, we would never turn it into a parking lot. I am really passionate about saving Montrose’s history. We’re not tearing down Chances. It would have been cheaper to do that, but I would never do it. And if we bought Mary’s, you could put a gun to my head and I wouldn’t tear it down.”

And now, true to his word, Heugel tells OutSmart magazine today that his crew has bought the lot at Westheimer Road and Yoakum Boulevard, and he’s not tearing down Mary’s.

“The city is making us tear down the old house on the back of the property, and we will use that land as additional parking for Hay Merchant and Underbelly. And demolition will start soon, but I want the community to know that we are not going to demolish Mary’s.”

Instead, Heugel says he will renovate the building, which has been vacant since Mary’s closed in 2009, and find an appropriate tenant for it.

Mary’s opened more than 40 years ago and during the '80s and ‘90s it was not only a GLBT watering hole, it was ground central for the Montrose community and a place of numerous memorial services for early AIDS victims. Since the nationally known bar closed, the Gulf Coast Archive and Museum of Gay, Lesbian, Bisexual and Transgender History, Inc. has tried to salvage much of the memorabilia from the bar.

But, as Heugel reports today, break-ins at the structure have resulted in a trashed interior and the loss of pretty much everything that was left. Still, he vows to rehab the building with the dignity its history deserves.

“It’s such an important part of Houston’s history, there’s no way we’ll demolish that building,” he says. He also wants to reach out to the community for any ideas they have for the building.

Sara Fernandez, member of an ad hoc group that was trying to save Mary’s, is happy to hear the news.

“The ashes of so many early Houston AIDS victims were scattered in the garden there,” she says of the space known as The Outback. “What I would like to see on the lot is for there to be some sort of green space where the patio is, or some sort of garden even if small. A sculpture or fountain would be nice.”

A Facebook page for Mary’s lists many of the names of those whose ashes were scattered there, although no one knows for sure how many there are. Over the years there were rumors that actual bodies were buried there, but there’s no evidence of that. Still, some sort of commemoration to those whose ashes are now mingled with the lot would be nice.

And Heugel seems open to the idea.