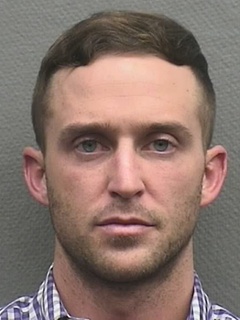 Huntley James Grichor, 26, has been charged with murder in the stabbing death of 25-year-old Shannon Gallagher. Photo courtesy of Houston Police Department

Murder charges have been filed against a suspect in the stabbing death of another man at the West Ave apartment complex early Sunday morning.

Huntley James Grichor, 26, appeared in court Monday. He was accompanied by his defense attorney and did not speak to the media.

According to a statement released by the Houston Police Department, HPD patrol officers responded to an emergency call from the apartment complex at around 2:30 a.m. on Sunday. When the officers arrived at the scene, they found a deceased man later identified as 25-year-old Shannon Gallagher.

A report from the HPD Homicide Division indicates that upon further investigation it was determined that Gallagher and Grichor had an altercation which ultimately lead to the fatal stabbing. Grichor was detained at the scene and subsequently charged with murder.

Prosecutors, who allege Grichor stabbed Gallagher to death, say the situation began at the Midtown bar GasLamp, when the girlfriends of the two men became engaged in an argument around 11 p.m. on Saturday. Grichor and Gallager reportedly became involved, although the argument was eventually broken up by a security guard.

Later, the couples separately re-encountered each other on the fourth floor of the Gables West Ave apartment complex at the 2800 block of Kirby Drive where both Grichor and a friend of Gallagher's happened to live, according to a report from KHOU Channel 11. Prosecutors allege that Grichor found a kitchen knife which he used to stab Gallagher to death.

"(Gallagher) went to LSU, he had a trust fund," Betty Ackermann, the woman who sold her home to Gallagher, said of the victim in an interview with KHOU. "I'm just shocked, really shocked."

According to his Facebook page, the victim attended Memorial High School.

Grichor, who has already posted the $50,000 bond, was charged in the 351st State District Court with Judge Mark Kent Ellis presiding.