Gin it to win it: Bombay Sapphire bartender competition brings out Houston's best

Gin it to win it: Bombay Sapphire bartender competition brings out Houston's best 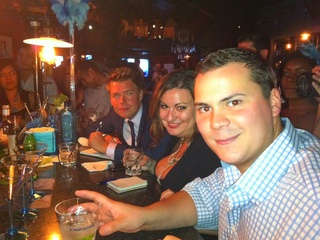 Everything at Hughes Hangar was accented in shades of Bombay Sapphire's signature aquamarine blue for the Bombay Sapphire GQ-Inspired Bartender cocktail competition on Tuesday night.

As the Houston Burlesque Review showed off their sexy dance moves, the judges took seats front and center at the bar, where nearly 20 local bartenders and mixologists from across Houston would have one shot to make a gin cocktail that could earn them fame and glory.

The winner of the Houston competition got a trip to compete in the national finals at The Palms in Las Vegas, plus a chance to land of the cover of GQ with their creation.

Judge Chip Hight brought a chef's palate to the table, while Bombay Sapphire brand ambassador Gary Hayward (who is probably the closest approximation to a real-life James Bond that I'll ever meet) added a laser-sharp attention to detail and a British accent (very important in any judging trio). As for me, I just brought my camera and a curiosity about how the flavor would be played with and highlighted.

Nicholas, from the Museum District's new lounge, 5015, led the night off with a jalepeño-heavy Southern Sapphire Gimlet, followed by Kimberly Pollack of Cullen's with a sweet honeydew blend she called a Saint Bombay. The rest of the competitors followed these patterns of sweet and fruity or strong and packing heat.

Nerves seemed to plague many competitors — some were flustered looking for specific ingredients or strainers, one knocked a full martini in the direction of one judge, another managed to break his shaker glass against the bar as he was shaking it, and one bartender almost forgot to add the Bombay Sapphire to his mix until prompted by the judges. I also learned there are a few ingredients I never want to taste in a cocktail ever again, notably grappa and radish juice. There's a thin line, as it turns out, between inspired and insane.

Among a crowded field, a few drinks stood above the rest. Chedda, from Grand Prize Bar, loosened up the competition (and the judges) by offering up a round of Jager shots before using the liquor in his drink, dubbed the Montrose Gin. A mix of grapefruit juice, lime juice, gin, black pepper and grapefruit house-made simple syrup and garnished with a squash blossom, the cocktail earned him third place.

For the top two, competition was locked between Claire Sprouse, lately of Beaver's and competing on behalf of Grand Prize, and Anvil's Alex Gregg. Sprouse's Rumours Bombay cocktail mixed a reduced simple syrup of clove, coriander and triple karmeliet beer with gin, lemon juice and fresh hops to garnish, with a result that was complex, refreshing and subtly sweet. Gregg also started with an impressive simple syrup derived from the culinary staple of mirepoix (an aromatic blend of carrot, celery and onion), and added celery bitters, ginger beer, lemon juice, apricot brandy and gin with a garnish of carrot wrapped in bacon, dubbing the drink the Sapphire Fiddle.

In the end, Gregg was crowned Houston's champion for his inspired use of ingredients, and celebrated his victory with a mass hug from his Anvil co-workers and friends. Fans wanting a taste can order the Zydeco Fiddle at Anvil, the drink that Gregg's creation was based on.