Foodie News
Who has the best breakfast in Houston? Texas Monthly picks the top spots in Texas 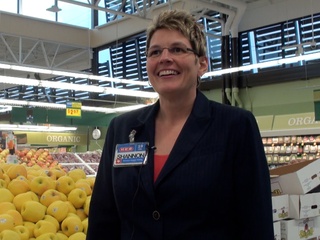 A food truck dubbed "Fork in the Road" will operate from the parking lot during Wednesday's grand opening. Photo by Joel Luks

When showing off the new H-E-B Montrose Market prior to its Wednesday grand opening, Scott McClelland looked like a kid who just gotten all of his favorite toys for Christmas.

The H-E-B Houston Division president just couldn't stop pointing out the many features of the flagship store he has been working on for much of the past two years. During a sneak peek of the supermarket located at West Alabama and Dunlavy Tuesday afternoon, McClelland proudly pointed out the Fresh Cut Fruit bar with 21 different freshly squeezed juices, the sushi bar featuring 20 individually-wrapped types of raw fish so shoppers can mix and match selections, the demonstration kitchen where chefs whip up recipes that can be made at home, the cheese shop with 500 different varieties, and the meat shop showcasing Kobe beef and other prime cuts.

The new H-E-B Montrose Market is like a Central Market with toilet paper and Tide because it offers everyday staples along with the more exotic items.

He singled out a hundred brands of barbecue sauce that stretched for 20 feet along one aisle and 32 choices of hummus in the refrigerated section. "Trader Joe's has only 22," he says about the potential competitor that is rumored to be opening down the street.

McClelland is so proud of his new store that he even showed a reporter the warehouse area in the back that is usually off limits to the public and insisted that a visit to the restroom facilities was in order to see the windows that allow lots of natural light to flow in.

"Is this not the best H-E-B store you've ever seen in your life?" he asked two employees from corporate headquarters in San Antonio who were in Houston to help the hundreds of workers get ready for the opening.

Though not offering as many different varieties of olives, cheeses and other goodies as the chain's top-of-the-line Central Market, the new store comes close. I think of it as Central Market with toilet paper and Tide because it offers everyday staples along with the more exotic items.

In 26 years at the supermarket chain, Bill Triplett, vice president of design and construction, has been involved with the construction of more than 200 H-E-B markets across Texas. But this store "clearly has a uniqueness about it," he says.

As previously reported on CultureMap, H-E-B officials solicited neighborhood input on the store and held a vote where area residents picked the design from three choices by Lake/Flato architects. The winning choice features a low-slung building with lots of glass and wood features.

The exterior includes an outdoor area with tables and seating for 160 and a stage where area entertainers will perform. A number of large trees were saved on the seven-acre property (power lines were rerouted around a Magnolia tree after one man asked H-E-B officials to make a special effort to keep it because he had proposed to his wife under the tree). Some of the felled trees were made into wooden benches.

The parking lot also includes an area for bicycles, with an air pump and tools to repair a tire, a charging station for electric automobiles and a food truck dubbed "Fork in the Road."

"It has been challenging to integrate (the store) into an urban neighborhood, but I think we've done a great job," Triplett says. "It's something the neighborhood can be proud of as well."

Just about everything will be in place for Wednesday's grand opening except wine and beer because the store is still waiting for its TABC license.

For a sneak preview of the new H-E-B Montrose Market, click on the video above.

A food truck dubbed "Fork in the Road" will operate from the parking lot during Wednesday's grand opening. Photo by Joel Luks