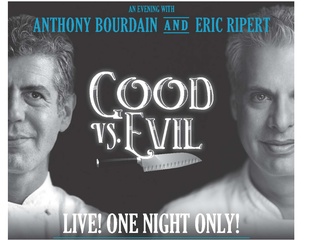 It’s not too surprising that a man who has traveled all over the world eating everything he’s served, talking to everyone in the kitchen, at the table and in the fields would have plenty of good stories and a few surprising friendships.

Food writer, chef and former host of No Reservations Anthony Bourdain joined friend and foil Eric Ripert, esteemed chef and restaurateur behind Le Bernardin, for an onstage discussion at Jones Hall on Saturday night. The contrast between Ripert, the paragon of class, refinement and classic culinary training, with Bourdain, who has eaten pig anus in front of an audience of millions, became less stark as the evening progressed.

The opening that played like an examination of a suspect (think Law & Order but with more inside jokes), began with Ripert taking the hot seat and Bourdain circling and questioning him. I almost felt nervous for the Frenchman; I wanted to run up and defend him from the playground bully.

That sentiment quickly faded, however, when Bourdain described an incident at famous French restaurant Le Comptoir where Ripert confronted a woman who was being abusive to a server, telling her that she was mal baisée (the ultimate French insult and a term you shouldn’t google at work) before punching her protective husband in the nose.

When the two switched places and it was Bourdain’s turn in the confessional chair, Ripert attempted to counter with equal force, although it was clear that he was the “good” in the show. Bourdain entertained and recounted some poignant moments in his life that made him who he is today.

Bourdain reminisced about Thanksgivings at his grandmother’s house, and how he didn’t like her food but said "thank you" and ate it, even asking for seconds of the unpalatable fare.

“When I’m at grandma’s house, I will eat whatever grandma puts in fucking front of me,” Bourdain said.

After that heartwarming memory, he went on to defend his scathing critiques of certain celebrity chefs and food critics. He discussed the Paula Deen debacle, explaining that he disapproved of her continuing to shell out unhealthy recipes for years after her diabetes diagnosis. He also said that it’s hard to hate (perceived foe) Rachael Ray before going on to expose Tom Colicchio’s stash of gin and tonics at Top Chef judging panels. Then came the fun part.

On Alan Richman: “I still don’t like the son of a bitch.”

On Martha Stewart: “She will shank a bitch.”

“If Ed Hardy fucked a juggalo,” the product would by Guy Fieri, said Bourdain, before musing on how the Diners, Drive-Ins and Dives chef will age. “How is Fieri de-douched? Does he turn down the flames on his sleeves sloooowly?”

“Sex and food is like church and state … keep it separate. The walk of shame is bad enough, but to do it with ranch in your hair?”

When the epicures retired to their leather seats for a serious discussion about the food industry — scarcity of resources, childhood obesity, the role of government in this field — Bourdain made sure to keep the tone light by asking Ripert some questions that made him blush and loosen up again.

“Is there anything sexy about food?” Bourdain asked before answering his own question. “Sex and food is like church and state … keep it separate. The walk of shame is bad enough, but to do it with ranch in your hair?”

Although Ripert lacks the storyteller’s acerbic wit, his toned-down personality and cheery disposition tempers Bourdain’s caustic commentary. They work well together because they're both provocative in their own ways and challenge each other while working towards the same goals. They are even creating a chocolate bar modeled after this tour.

Ripert will finish this short run of appearances while Bourdain continues in an independent national tour. Bourdain’s last episode of No Reservations aired recently, and he has already started production of a new show. With CNN backing the new project, he will have better access to dangerous locales, a bigger budget and will even retain his production company. But it is still CNN, and many of us loyal fans are wondering if we will lose the gourmand who still manages to shock the hard-to-offend, who encourages our daily fantasies of traveling the globe and who reminds us to eat anything our grandmothers serve.

Something tells me that we can rest assured that he will stay true to his convictions. When asked about the notorious Cadillac commercial featuring his narration and image, Bourdain says that the Travel Channel recycled portions of past shows into the ad without his permission.

“It starts with Cadillac, ends with lube,” Bourdain said, explaining his refusal to submit to the network’s constraints.

So maybe he won’t be hawking a hot sauce or promoting fast food chains anytime soon.