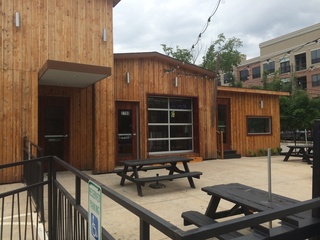 In keeping with the "rustic" theme of its ice house-style design, Bourbon on Bagby will have Texas paraphernalia on the walls.  Photo by Eric Sandler

A new bar is evolving out of the former OTC Midtown that aims to offer an alternative to high-profile party spots like The Dogwood and Gaslamp. After "parting ways" with some of his former partners, Matt Laterza has relaunched the bar as Bourbon on Bagby (the Houston Business Journal first reported the development).

"Our focus is more food-centric," Laterza tells CultureMap. "We're putting together a really good menu." For example, Bourbon on Bagby will sell locally-raised beef from 44 Farms for its hamburgers and all-beef Angus franks. Pulled pork, a favorite from OTC's pizza-centric menu, has been tweaked with a new recipe.

"The pizzas were fantastic. They were well-executed," Laterza says. "But due to the high food cost (of ingredients), we had to charge a premium price, but people weren't willing to pay that for a pizza."

Laterza is optimistic that Midtown residents will be more receptive to the new menu, which he developed with chef Kevin Campbell. Some of the menu items are already available, while the rest will roll out of the next few weeks.

Bourbon on Bagby will also offer a late night dining option with reverse brunch from 10 p.m. to 2 a.m. on weekends. Laterza says he likes the food trucks that can be found at bars around Midtown but that "sometimes you want to sit down and have breakfast."

As Laterza explained to the HBJ, his goal is to make the revamped bar a gathering place for "oil and gas sales guys," which is the world he operated in prior to entering the hospitality industry. Towards that end, Bourbon on Bagby emphasizes a rustic, ice house look with a Texas theme. The space sports a custom Shiner Bock neon sign that features an oil derrick, and Campbell's prior experience includes cooking on offshore oil platforms.

Of course, in keeping with the name, Bourbon on Bagby will offer a solid mix of bourbon and Scotch. "Nothing too esoteric," Laterza notes, but certainly enough that fans should find something to satisfy their cravings.

With a low-key atmosphere and intriguing food options, Bourbon on Bagby looks poised to be a solid alternative to some of Midtown's larger spots. Besides, who doesn't love a great burger?