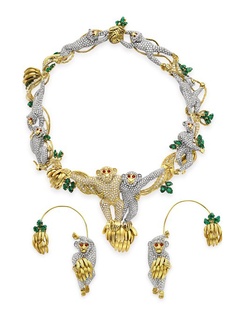 The monkey necklace in diamonds and emeralds sold for a cool $260,000 at Christie's auction of Liz Taylor's jewels. Courtesy of Christie's

While the auction of Elizabeth Taylor's jewels set a world record for a single collection at Christie's Tuesday night, there was an interesting Houston connection. Among the numerous pieces fetching a total $116 million was the so-called "monkey necklace" and earrings, designed for Baroness Sandra di Portanova by her husband, Baron Ricky di Portanova.

That dazzling Houston duo, who kept the money flowing as generously as oil from their deep Texas wells, was known for an extravagant lifestyle, over-the-top parties and a penchant for very serious jewelry.

Ricky regularly lavished his bride with baubles and beads, including 20-karat diamond earrings and a 26-karat engagement ring, all the while fancying himself as an artist and designer. He created the monkey necklace set, complete with golden bananas, as a surprise gift to the baroness.

When the di Portanova jewels were sold, after their deaths, at auction at Christie's in 2000, the monkey necklace and earrings went for a mere $55,000. The diamond and emerald set eventually ended up in the hands of Michael Jackson, who presented it as a gift to Elizabeth Taylor.

The whimsical, some would say bizarre, necklace and earrings sold for $260,000 in the auction of Taylor's jewelry. The auction brought in a record $115 million,