The boarded door at Hermès with a sign that said, "Hermes of Paris is temporarily closed. We are sorry for the inconvenience." Whitney Radley 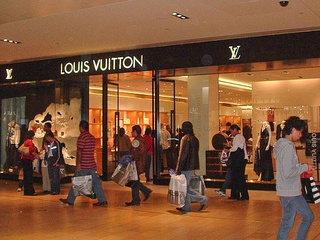 Louis Vuitton reports no theft, but closed for broken glass on Saturday.

UPDATE: The Hermès of Paris store reopened Saturday. Click here for details and to see the surveillance video of the crime.

In the heart of the holiday season, the luxury retailer Hermès of Paris was closed on Thursday. The front door of the tony store at 1800 Post Oak Boulevard was boarded over with plywood after the store was apparently cleaned out by thieves early Wednesday morning.

A simple voicemail message to the store said: "Thank you for calling Hermès of Paris. Unfortunately, the Houston location will be temporarily closed due to emergency repairs. We will be open as soon as possible. Sorry for the inconvenience."

The door, specially imported from France when the store moved a few hundred feet to the south on Post Oak to a new larger location in the first phase of BLVD. Place several years ago, was broken down around 2:45 a.m. on Wednesday, according to a police report.

A source close to the store said a surveillance video shows 14 individuals ripping designer wares from walls and tabletops, entering in a swarm and cleaning the store out completely in a matter of minutes.

However, another source close to the store said that the most expensive merchandise was in a locked safe, which the thieves were not able to access.

The luxury company is known for it coveted handcrafted Birkin bags, which generally start around $8,000, increasing in price depending upon materials used (a rare bag of crocodile leather with a diamond clasp cost $186,400 in 2009). French designer's silk scarves go for $300 to $760 each. In addition to handbags and scarves, the Houston store carries fragrances, clothing, housewares and jewelry.

A call to Wulfe & Co., the developer and lessor of BLVD. Place, was not immediately returned.

Representatives for the Galleria declined to comment on the incident because they said it is under investigation by the Houston Police Department.

"Whenever something like this occurs in our community, our primary concern is always for the safety of our shoppers and employees. We are pleased to report that no one was injured during this unfortunate incident," Galleria general manager David Anderson said in an email statement.

"The Galleria has always been committed to providing a safe and secure shopping environment to our shoppers and employees. To do this, we take several proactive security measures, including 24-hour patrols of the property, customer and tenant escorts and numerous additional safety procedures. As always, we encourage our shoppers and employees to report suspicious activity immediately to Galleria security."

The National Retail Federation says that, nationally, retail crime is on the rise this holiday season. The retail trade group estimates that around 40 percent of theft is caused by organized crime rings, "returns" fraud, and shoplifting.

"Over the years, we have seen an increase in organized crime activity," Joseph LaRocca, the NRF's Vice President Of Loss Prevention, told CNBC. "In 2010, 89% of retailers polled were victims of organized shopping crime. In 2011, it was 94.5%. So we have seen organized retail crime on the rise and the skill of these groups and the types of tools they use continue to advance."

The boarded door at Hermès with a sign that said, "Hermes of Paris is temporarily closed. We are sorry for the inconvenience." Whitney Radley