Texas State goes up in smoke
Want to score some dope? See you in San Marcos
LATEST NEWS
Where to eat in Houston: 10 exciting new restaurants for fall dining
A personal remembrance

Inherently private, Peter Marzio lived a life at center stage and all the world applauded

Inherently private, Peter Marzio lived a life at center stage and all the world applauded 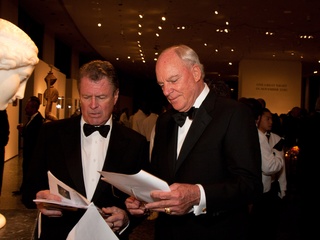 As recently as Nov. 16, Peter Marzio put on his tuxedo for the museum's One Great Night in November fundraiser. Photo by Kim Coffman 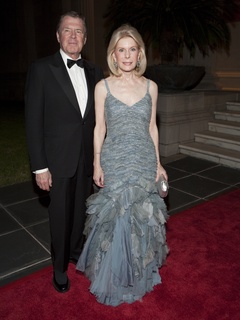 Peter and Frances Marzio forged a solid, loving partnership in their 31 years of marriage, one that many could envy. Photo by Jenny Antill
Life Trustee Jeanie Kilroy, left, Peter Marzio and MFAH board chair Cornelia Long took bows at the dedication of the Bayou Bend Visitors Center in late September. Photo by Gary Fountain
Frances and Peter Marzio never missed the Bayou Bend Garden Party held each spring. Photo by Thomas R. DuBrock
For the Glassell School's 'Local Color' benefit last spring, the Marzios, shown here with David Gerger, stepped out in bright red, not their typical sartorial statement. Photo by Gary Fountain

I don't recall the first time that I actually spoke with Peter Marzio but I do remember the first time that I saw him – the movie star-handsome museum director crossing Bissonnet to the museum entrance, arriving for some unknown event back in the late '80s. Fashionably dressed in slacks and wool blazer, fit and lean as he would remain throughout his 28 years at the helm of the MFAH, he cut a striking figure, almost intimidating in his good looks, at least to this reporter then-fresh on the society beat.

Perhaps that initial superficiality on my part can be forgiven. Because, really, the man was gorgeous  — even up until the last time I saw him, which was a few weeks ago in the lobby of the condo building where we both lived. "Hi cutie," he said with his usual beaming charm as he headed for the elevator. It was only a few days before he checked into the hospital for the last time.

My husband, Shafik Rifaat, and I moved into the high-rise overlooking Buffalo Bayou about the same time that Peter and Frances Marzio, the serene blonde counterpoint to his Italian fervor, took residence there. We, like so many others, were easily and willingly seduced by Peter's natural charm. Through some natural affinity, a close friendship developed between the four of us. Shafik adored Peter and vice versa.

While the Marzios carefully guarded their privacy in the building, both held positions at various times on the homeowners board, both serving as the measured voices of wisdom in the natural firmament of condo madness.

Theirs was a partnership that extended from their home to the museum and back again. We noted this remarkable dedication, respect and commitment between the Marzios that is rare in couples today. Even after 31 years of marriage, they enjoyed a rock solid union. This resilient team of two quietly and with great integrity fought the battle with cancer that could not be won.

Peter died last week following a recurrence of the disease. The fact that so few knew of his condition was testament to the privacy that he relished in a position that had him continually center front in society.

The richest memories and insights to Peter came from the small dinner parties that they occasionally hosted in their home with notables such as architect Rafael Moneo, who designed the Beck building; with contemporary art collector Gisele Broida, daughter of Olivia de Havilland, and other art world figures; and with stalwarts of the museum ranging from the late Caroline Law, whose $400 million gift moved the MFAH to the top rung of museums; to Cornelia and Meredith Long; Nancy and Rich Kinder and Macey and Harry Reasoner.

Gracious host, witty, irreverent, richly intelligent and far more liberal than some of his patrons would like to know, Peter along with Frances entertained with grace and understated style. A caterer in the kitchen, white linens and white flowers on the table, the monochromatic white-on-white decor of their contemporary apartment was unblemished by a single errant strain of color other than on the Calder mobile that hangs in the living room.

The Marzios' aerie reflects a minimalist esthetic save for the art riches on the walls and Peter enjoyed entertaining first-time visitors with the story of the late philanthropist Winifred Hirsch's inaugural visit to their home. Peter liked to tell guests that Winifred observed, "It's a beautiful apartment and I'm sure it will be lovely when you've finished decorating it."

A man of good taste

Few would imagine that this huge art world figure was an accomplished cook. Marzio took care of their dinners for two at home, often arriving at the building in the late afternoon toting shopping bags from Whole Foods. He was a wine connoisseur as well whose tastes ran to French Bordeaux. He stopped drinking some years ago but never failed to offer the best to his guests or to bring a fine St. Estephe or Chateau Haut-Brion as a gift to dinner in our apartment. In lieu of wine for Peter, friends knew to have plenty of Diet Coke on hand.

The closest moments came when the Marzios had dinner in our home, just the four of us. He and Frances never arrived in less than ebullient spirits. We shared an honest warmth with no agendas, no masks, and no worries of requiring "off the record" promises (it was a given). These private times together confirmed what we had observed in the public Peter Marzio — a man of integrity, honesty, high intelligence and a playful wit that, among the closest of  friends, ran to the risqué.
A voracious reader, Peter was always a great source for book recommendations. He loved mysteries, novels by Alan Furst and Robert Wilson and got a kick out of the wicked tales by Carl Hiaasen. Of late, Peter had been taken with Stieg Larsson's trilogy on Lisbeth Sanders, The Girl With the Dragon Tattoo. He had read all three books and seen each of the movies, detesting the misogyny exposed and applauding the punishment that was meted out to the villains.

The field of play

While Peter was all about the museum when in Houston, save for his regular vigorous runs from our building around Memorial Park and back, in Aspen, where he and Frances enjoyed both summer and winter breaks, he relished the outdoors and active sports. In winter, Peter was an avid skier. In summer, he hiked and jogged and enjoyed peaceful hours on the Frying Pan River fly fishing with friends from Houston. Shafik and Peter shared several outings on the river. I'll leave the fish tales to my husband.

No dandy this museum director, he enjoyed reminding people of his upbringing by his uncles with whom he played rough and tumble football as a kid. He went to college on a sports scholarship and never lost interest in athletics. Peter was a huge Texans fan and he and Frances were regular guests in Bob and Janice McNair's suite at Reliant Stadium. You wouldn't find Peter schmoozing with the notables during the game. He focused on the field and saved the socializing for halftime. Baseball was another interest but football remained his love and the McNairs were among the Marzios friends.

Monday night, the Houston Texans paid tribute to his contributions to the city in a special pre-game ceremony. Frances said he would have loved it.

The city has lost a great cultural leader, probably the most significant in its history. The museum, though sure to recover, has lost its captain. And so many of us have lost a dear, dear friend. I don't know if Peter really understood how many lives he touched with his sheer brilliance but simply to be in his company was a gift. To be considered among his friends a treasure. Hearts are aching across the city at his loss and mine is no exception.

"In a business that can be pretty tough, he was genuinely a nice and decent person and I think that resonated with those who knew him," she said on Monday.

Frances acknowledged up front that it might sound unusual, but she felt that one of her husband's greatest attributes was his total lack of gender bias. "Peter was someone who really respected women," she said. "He believed that a woman could run anything as well as a man. And, as a consequence, he had many supporters that were women.

"You felt safe with him and you felt confident. You could trust him. His ability to instill faith and confidence in you was a gift.

"His friendship was genuine. He didn't want anything from you," she said.

From their first meeting during Peter's recruitment from the Corcoran Gallery in Washington D.C., this long-time museum supporter and close personal friend recalls that he sensed Peter's strong character and soon developed a "tremendous personal respect" for him.

"The whole basis of our relationship was that I had complete confidence in what he told me . . . He was serious about what he was doing. He knew what he was doing and he would always tell you straight.

"Peter was a wonderful combination of brilliance, vision, dedication, loyalty and utter lack of pretension," he e-mailed from his offices at Vinson & Elkins.

"What he accomplished at the museum in a little more than a quarter of a century is literally staggering in scope, even in hindsight. Try to imagine the vision and talent it took in 1982 to create a world class museum in Houston.

"One could not have a better friend. Endlessly stimulating, entertaining and companionable. I hope we see close to his like again."

As recently as Nov. 16, Peter Marzio put on his tuxedo for the museum's One Great Night in November fundraiser. Photo by Kim Coffman