A Blow For Equality
A great day in the US: Mayor Parker celebrates gay marriage wins

Wendy Davis rules the web: Why her filibuster matters and where to buy those pink sneakers

Why Wendy Davis filibuster matters & where to buy those pink sneakers 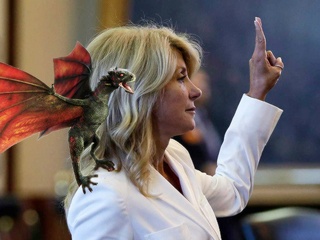 Wendy Davis should totally have a cameo on Game of Thrones. Buzzfeed.com

Wendy Davis sure is getting a lot of press these days. The Democratic state senator from Fort Worth made headlines the world over with her 10-hour filibuster to kill the most restrictive abortion bill in America.

Gov. Rick Perry has called a second special session and will attempt to pass a new version of Senate Bill 5 starting July 1. In the meantime, Davis is enjoying near-celebrity status for her feat of physical and mental strength. Can't get enough Wendy? Here's a roundup of her best Internet billing.

2. Why an abortion filibuster in Texas matters. Rolling Stone has a great piece on the proof in Davis' pudding. As reporter Jessica Mason Pielko puts it, "The right wing is targeting states like Texas for a reason," but they've seriously miscalculated the political climate on a woman's right to choose.

5.  Buy your abortion filibuster sneakers here. Those pink Mizuno Wave Rider shoes are probably going to need another product run soon. And Davis might be looking at an endorsement deal.

6. Could Davis lose her Senate seat? The Supreme Court's decision on the Voting Rights Act could have serious consequences for Davis, who was elected with strong support from minority voters. Of course, Davis might be destined for a different elected office in 2014.