The ultimate diamond anniversary: A blinged out diva returns home to Houston for stunning gala

Ultimate diamond anniversary: A blinged out diva returns to Houston 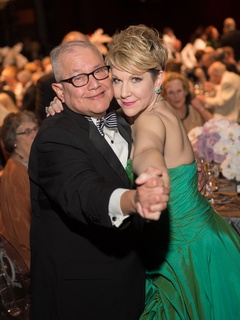 Following a stunning display of her coloratura talents in formal concert in Wortham Center's Cullen Theater, world acclaimed mezzo-soprano Joyce DiDonato let it rip ragtime style on stage in the Brown Theater where she and Houston Grand Opera music and artistic director Patrick Summers fairly floored the black-tie crowd with their rendition of "I Love a Piano."

It was the icing on the cake of HGO's 60th anniversary celebration, a stellar evening in which every component dazzled as one would expect of a diamond anniversary.

None exemplified that high-carat tradition more than DiDonato, who was draped in several million dollars worth of diamonds and emeralds compliments of Diamond Underwriter Tenenbaum & Co. Proprietors Kevin Black and Tony Bradfield brought along a case holding 28 pieces of jewelry for the diva to choose from.

The two-tiered evening, chaired by Terrylin Neale, raised $628,000 for the HGO Endowment.

As an HGO Studio alumna, DiDonato was accompanied in the concert by current studio members and she credited Houston as the birthplace of her career. She told the dinner gathering, "There's no place like home. It's the truth."

DiDonato was accompanied in the concert by current studio members and she credited Houston as the birthplace of her career.

While the earlier concert was open to the public, the black-tie dinner on stage was reserved for uber patrons who were wined and dined (a grand four-course dinner from Jackson and Co.) amid a stunning setting (The Events Co.) hung with crystal chandeliers, embellished with reams of white orchids and decorated with ghost chairs etched with the evening's logo.

In his remarks to the Cullen Theater gathering, HGO managing director Perryn Leech noted that the company's first production was Strauss' Salome in January of 1956. "This bold choice would come to define a company, which like its hometown, is known for its energetic and entrepreneurial spirit," he said, "A company for whom good enough — is never truly good enough."

Though one would have to counter that this anniversary gala was far beyond good enough.

Check back to see the full array of party pix from the gala on CultureMap this Tuesday.