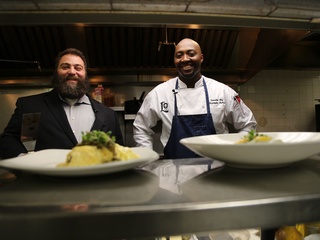 Lots of chefs like a little music in the kitchen, but how many make it themselves? Meet Chris Andrus, a chef who sings while he cooks.

The Humble native recently took over as the executive chef of Bistro Lancaster. As a child, Andrus attended plays and musicals in the Theater District with his mother. Now the chef, a winner on season three of the Food Network show Cutthroat Kitchen, has brought his globally-influenced, locally sourced cuisine to the downtown hotel.

Andus says he's been singing his whole life in musical theater performances, choirs and on his own. While his favorite role is "Slim" in Oklahoma, he performs "Old Man River" from Show Boat in the video above.

Diners can rest assured that Andrus's cooking is just as good as his singing.

In between songs, Andrus makes two brunch dishes from his "Holiday Wonderland" menu that's available on the weekends through the end of the year: Braised bison omelette with tomatillo salsa and petite flat iron steak with harissa grits and quail eggs.

With a resume that includes both stints at Bank in the Hotel Icon under Bryan Caswell and at Sorrell Urban Bistro, diners can rest assured that Andrus's cooking is just as good as his singing.

Definitely watch the video, because Andrus can really sing.