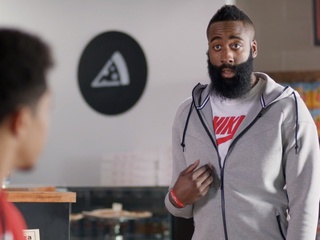 Why would James Harden be defensive? Foot Locker/YouTube

The Foot Locker commercial that Rockets superstar James Harden filmed less than two weeks ago at Siphon Coffee in Montrose has just been released and it's pretty funny — although you can't tell the location unless you're a regular customer.

The ad plays off Harden's reputation as a poor defensive player — cemented by a YouTube video that highlighted his many shortcomings (1.5 million views and climbing).

As Siphon Coffee owner Michael Caplan told CultureMap, the creative team from Foot Locker transformed the cafe into a pizza shop with new signs and a few well-placed props, because "we think pizza is more in our demographic than coffee." Indeed, if the filming hadn't been so well-documented, it's unlikely anyone would have realized the commercial was filmed at Siphon (or even in Houston).

Caplan praised Harden's knowledge of his lines. And, indeed, the Rockets star seems sincere about not being defensive.