Foodie News
Killen's Steakhouse in the Heights is dead: Is the Stella Sola restaurant space doomed? 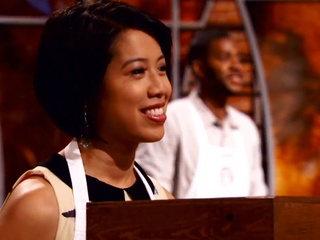 As part of the prize, Ha will receive $250,000 and a cookbook deal. Fox Broadcasting/YouTube

Christine Ha was looking for a personal challenge when she initially signed up for Fox's MasterChef.

The blind cook and creative writing Masters student at the University of Houston stood out among the 100 entrants in the audition and continued to impress the judges with her commitment and her cooking as the pool of competitors narrowed.

Ha began to see that she had a chance as she advanced, and on Monday's season finale, she took the title of Master Chef — and with it a $250,000 prize and a cookbook deal.

For the final challenge, the two remaining contestants — Ha and Mississippi-based cook Josh Marks — were tasked with completing an appetizer, an entree and a dessert within three hours.

"I feel the pressure of cooking the meal of my life," Ha told co-host Gordon Ramsay as the clock ticked down the final minutes.

Ha's menu, on the other hand, consisted of elevated Southeast Asian home cooking, which the judges patronizingly referred to as "hawker stand street food." She started with a fresh, bright Thai papaya salad, drizzled with a fish sauce vinaigrette and topped with crab, followed by braised and caramelized pork belly with veggies and a perfect quail egg. A coconut lime sorbet with a ginger tuile rounded out the three course meal.

Stacked against Marks' sophisticated flavors and creative plating, Ha's dishes made up in flavor and execution what they lacked in presentation. The judges called their decision difficult but clear, and the announcement was celebrated with champagne and a shower of colorful confetti.

"I'm living proof that dreams come true against all odds," said Ha, who has a desire to continue marrying her passions of writing and cooking in the future.

And perhaps open up an ice cream shop.

How Children’s Memorial Hermann Hospital gave one boy a normal heart
Memorial Hermann offers 9 healthy habits for the New Year
COVID-19 vaccine for kids ages 5-11: What you need to know.