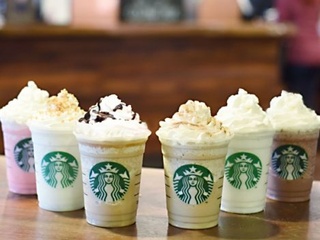 Starbucks releases six Frappuccino flavors all at once. Photo courtesy of Starbucks

After a longtime policy of being very measured with its flavors, Starbucks is going a little crazy by introducing six new Frappuccino beverages, available today (June 8). They will become part of a social media vote campaign for the company.

From June 19-30, customers can vote for their favorite on Frappuccino.com. The winner will be announced July 3.

"Over the years we have seen many creative recipes from our customers, and the six Fan Flavor Frappuccino beverages featured in the Flav-Off contest represent a few of the most popular recipes," Starbucks marketing director Renee Jones said in a press release.

The six new flavors show the company's continued gravitation away from coffee and more toward an ice cream-type lineup for this drink:

Starbucks launched the Frappuccino 20 years ago; the only two flavors were coffee and mocha. In other countries, there are unique Frappuccino flavors that reflect their palates, such as coffee jelly or red bean green tea in Asia, algarrobina Frappuccino with syrup from the black carob tree in Peru and the chocolate brigadeiro Frappuccino in Brazil.

We get cotton candy.