Media Rumblings
As other magazines flounder, one Houston foodie favorite takes off

Upset! Unknown beats some of Houston's top chefs in an epic food showdown

Upset! Unknown beats some of Houston's top chefs in a food showdown 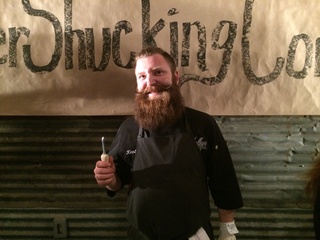 Like moths to a flame or sailors to the Sirens of ancient mythology, tempting prizes have always come with the threat of danger. In that spirit, Julep co-owner Alba Huerta decided to host an oyster shucking competition with a similarly worthy, if slightly less lethal, prize.

In exchange for risking puncture wounds while trying to open Wellfleet oysters a quickly as possible, the winning contestant would earn a highly coveted bottle of Pappy Van Winkle's 20-year Family Reserve bourbon.

The limited production batches sell out almost immediately. Even a popular bar might only be allocated a couple of bottles per year. Retail prices run about $250, but 1.5-ounce shots might fetch $50 or more. Secondary market prices are considerably higher. One website sells a full bottle for an astonishing $1,500.

They each stood before buckets full of ice and 18 oysters with their knives at the ready.

After three preliminary rounds winnowed down the 20 contestants, four men, including Siegel-Gardner, Marin and home cooking enthusiast Ben Quasius, moved on to the finals. They each stood before buckets full of ice and 18 oysters with their knives at the ready.

Even in the face of so much talent, it was a relative unknown who took the prize. Jose Rodiles, a retail manager at Airline Seafood, stunned the crowd with a final time of 3:54:59. The winner, who can usually be found representing Airline at Urban Harvest's Saturday farmers market, credits constant practice for his speedy technique.