Recession Busters
In the mood to buy: Homes sales jump for eighth straight month and spring should be even better

Is The Woodlands becoming the next energy corridor? Real estate experts are bullish on the future

Is The Woodlands becoming the next energy corridor? Real estate experts are bullish on the future

Nightlife on Market Street in The Woodlands Photo by Marlo Saucedo 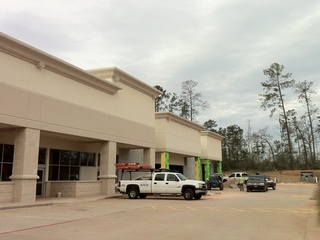 During a recent real estate event called “The Future of The Woodlands,” a crowd of nearly 900 suited corporate types meandered past the chocolate fountain and munchie smorgasboard at The Woodlands Waterway Marriott’s main ballroom and schmoozed near their tables until loud Rolling Stones and Adele drowned out conversation.

The word on the current state of real estate development in The Woodlands, which brought out such a packed house, turns out to be: “Fine.”

Research Forest Lakeside is a planned 10-building development on 77 acres along Lake Woodlands, with 1.9 million square feet of office space; Talisman Energy Inc. will occupy half of the first building under construction. 3 Waterway Square, a 240,000 square foot Class A multi-tenant building, will be at the corner of Lake Robbins Drive and Woodloch Forest Drive, with planned completion next year.

“This is such a dynamic market. The Woodlands represents 20 percent of absorption in the Houston suburban market but just over 4 percent of the office inventory. Demand seems to always outpace supply up here,” said Bob Parsley, co-chairman and principal for Colliers International.

Dan Leverett, vice president of commercial real estate for The Woodlands Development Company, explained that the community’s current successful numbers are a result of “planning and execution” with slow initial growth: “George Mitchell set aside 1,200 acres along the freeway [in 1974] and held it, waiting for dense urban development.”

The Cynthia Woods Mitchell Pavilion and the Woodlands Mall on that land weren’t built until the early 1990s, and the Waterway area developed into a dense live-work-play area only recently.

“As little as 12 years ago we were absolutely NOT booming in commercial real estate,” said Leverett. “As late as seven years ago, apartment builders were not considering doing dense urban construction on the Waterway, which is now as dense with sustainable vertical and horizontal mixed-use development as anything in the city [of Houston].”

James Warmack, managing partner of research for Forest Lakeside, weighed in: “When analyzing sub-markets, companies pick The Woodlands because it seems to fit what their employees want.”

Outgrowing Greenspoint, Anadarko did an employee survey and found that 30 percent already lived in The Woodlands. “People were just very happy here; they just loved where they lived,” said Boyd Burdett, director of real estate services and business services at Anadarko Petroleum Corporation. He called The Woodlands “a full town, not just a neighborhood.”

Although retail has been “difficult, at best” across the nation, in The Woodlands area it’s “very healthy, in demand, and there’s more in the pipeline,” CBRE's RipReynolds noted.

Rip Reynolds of CBRE says he has heard people say, “Wow, I didn’t know this was here!” all the time regarding The Woodlands. Although retail has been “difficult, at best” across the nation, in The Woodlands area it’s “very healthy, in demand, and there’s more in the pipeline,”  Reynolds noted.

Traditionally, retailers establish their Houston flagship near The Galleria, and then go out to a suburb. But as in Lululemon Athletica’s and Allen Edmonds’ case and more recently with Trader Joe’s, The Woodlands’ stores are opening before the Houston locations, Reynolds said. In Trader Joe’s case the store is not right off the highway, but six miles into The Woodlands.

The Woodlands is currently the second-best-selling master planned community in the country, with a population of 97,000. Montgomery County represents 5 percent of the Houston area’s employment, but 10 percent  of the growth.

Nightlife on Market Street in The Woodlands Photo by Marlo Saucedo