Jimmy Fallon upstaged in Rodeo visit by BFF Leroy Shafer, but he sure loves Houston

Jimmy Fallon upstaged in Rodeo visit by BFF Leroy Shafer, but he sure loves Houston

Jimmy Fallon and his announcer/sidekick Steve Higgins clowned it up at the Houston Rodeo. Courtesy of NBC 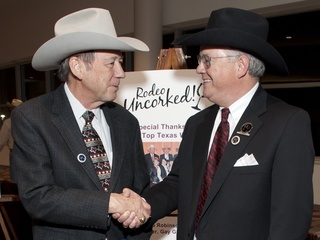 Jimmy Fallon might be the star of his own late night talk show. But the Houston Livestock Show and Rodeo is Leroy Shafer's house.

That much was clear from the segment from Fallon's Houston visit on March 5 and 6 — first reported on CultureMap — that aired Tuesday night/Wednesday morning on Late Night with Jimmy Fallon. For it was the straight man, true cowboy delivery of Shafer, the Rodeo's chief operating officer, that provided the most amusing moments.

Well that and Fallon calling Shafer "my BFF" at one point.

The nearly seven-minute-long Late Night bit centered on Fallon's attempts to compete in the calf scramble with a bunch of high school kids (official Rodeo rules say contestants must be between 14-18 years old). But it was mostly just an excuse for Fallon to run out in a red cowboy suit with a white hat, deliver a quasi inspirational speech to the bored-looking teenagers (you didn't have to be much of an actor to pull this off at home either) and grapple with two kids, who Fallon later assured his audience were "actors."

But Fallon gets plenty of points for his true Houston love. What was most apparent from the segment — besides Shafer's surprising screen presence — is that the NBC man had a heck of a time in H-Town.

"I went to the world famous Houston Livestock Show and Rodeo," Fallon said in introducing the piece. "If you haven't been there, you have to go. This thing is awesome. They've got food. Deep-fried food. Carnival rides. Deep-fried carnival rides."

And to close out the segment, Fallon gave another "Thank you Houston" shout out.

OK, Shafer didn't touch that one. The longtime Rodeo COO shifted into talking about the importance of winning. But he had his shrug ready when Higgins and Fallon went into the inevitable joke on milking a male cow.

Get this cowboy in show biz.

Jimmy Fallon and his announcer/sidekick Steve Higgins clowned it up at the Houston Rodeo. Courtesy of NBC