Running from wolves: Houston-born actor Dallas Roberts dashes through the snow in The Grey

Running from wolves: Houston-born actor Dallas Roberts dashes through the snow in The Grey

Actor Dallas Roberts was born in Houston Photo via PacificCoastNews.com

Dallas Roberts gets chased by wolves in The Grey 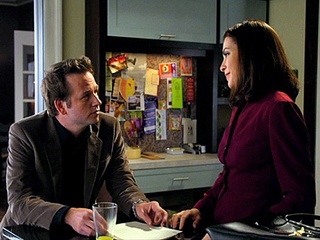 You might not be able to identify him by name, but chances are good you’ll recognize Houston-born actor Dallas Roberts anyway. Even if you weren’t his classmate at Paul Revere Middle School or Robert E. Lee High School back in the day.

A graduate of the Juilliard School, Roberts boasts a resume that includes stand-out supporting performances in films ranging from The Notorious Bettie Paige to 3:10 to Yuma, and memorable guest spots on several TV series. (Like many New York-based actors, he takes pride in having landed multiple gigs on Law & Order and its spinoffs: “In New York,” he says, “we used to call it ‘going to acting graduate school.’”) He’s had continuing roles on the cable series Rubicon and The L Word – and currently appears periodically on CBS as Julianna Margulies’ witty gay brother on The Good Wife.

It’s one of those things that I always have to explain. Especially now that I’ve moved away from Texas. People ask me, “Oh, are you from Dallas?” And I say, “No, I’m from Houston.” And for some reason, people find that hilarious. I don’t know why.

This weekend at theaters and drive-ins everywhere, Roberts will be showcased in his biggest movie role to date, co-starring opposite Liam Neeson in The Grey, director Joe Carnahan’s suspenseful thriller about the life-or-death struggle of air-crash survivors pursued by humongous wolves in the remote middle of a snow-blanketed nowhere.

The 41-year-actor plays Hendrick, an oil-company employee who’s very much out of his element when he and a handful of other workers fall out of the sky and into an isolated stretch of Alaska (played, in a bold stroke of casting, by British Columbia).

The bad news: The men are miles and miles from civilization. The worse news: The wolves are very close, and getting closer all the time.

A few days ago, Roberts flew in from New York – where he lives with his wife, scenic designer Christine Jones, and their two sons – to visit his hometown and promote his thrilling and chilling movie. That’s when we caught up with the local boy made good – and started out by asking the question anybody would want to ask after seeing Roberts trudging through the snow for the better part of two hours.

CultureMap: So just how damn cold was it where you were filming?

Dallas Roberts: It was all the way cold. To the end of cold. That’s how cold it was. Negative-40 degrees, 60-miles-an-hour winds. Cold.

DR: Luckily, you could put on as many layers of clothing as you wanted under your sort-of costume. And they took care of you. Really, when you were all kitted up, you could stand out there for hours and not be shivering to death. Later on, when you took everything off, you realized just how cold you were. But while you were out there – it was more fun than hell.

CM: Ever have snowball fights?

DR: [Laughs] Sometimes, people would knock each other down in the snow. But the thing was, most people didn’t have waterproof gloves. In fact, I had socks on my hands, because the characters really weren’t supposed to have gloves – just stuff you found in the plane. So as soon as you put your hands in the snow, your hands got extremely cold. So people would avoid that at all cost.

CM: Obviously, you’re a working actor, and you do whatever the role requires. But when you first got the script for this, did you think, “Oh, man, I bet that’s going to be harsh,” or something like that?

DR: Well, right from the start, [director] Joe Carnahan made it clear that you weren’t going to be on some soundstage somewhere. You were going to be up a mountain, on the side of it, freezing. He made it clear that’s what you were getting into. But before I started thinking about the cold, I was way more attracted to the story and the people in it. The cold was just something to deal with in order to get to that juicy stuff.

CM: What else did Carnahan do to prepare the cast?

DR: Joe sat us down and screened Deliverance for us. And Jaws, which had a sort of similar theme – the bad things out there are coming to get you, but the characters in the drama are just as interesting.

CM: Did you come up with a back story for your character?

DR: I think Henrdick is probably some sort of middle-management guy in the oil company. Probably carries a clipboard more often than he carries a pipe-fitting wrench. But as soon as he hits the snow along with everybody else, all those lines get erased. He’s just one of the guys.

CM: Going back a bit: When your parents named you Dallas, knowing you’d be growing up in Houston – were they thinking in terms of “A Boy Named Sue” as a way of toughening you up?

DR: It’s one of those things that I always have to explain. Especially now that I’ve moved away from Texas. People ask me, “Oh, are you from Dallas?” And I say, “No, I’m from Houston.” And for some reason, people find that hilarious. I don’t know why.

But Dad was a proud Texan, and he wanted his first son to be named Dallas. And then I had a brother a year and a half later, and it was my father’s intention to name him Houston. But my mother put the kibosh on that. He was named Bryan – which, of course, is also a city in Texas. But, then again, everything is a city in Texas, I’m convinced.

CM: Did you find yourself having to defend your name during schoolyard fights while you were growing up?

DR: [Laughs] Actually, it take a certain level of sophistication to get to the level of the ultimate insult – “Phallus!” – so I guess I was lucky all I ever got were things like, “Well, what are you up to, Fort Worth?”

CM: So when you’re in line at the grocery store or whatever, and people come up to you because they recognize you – what do you get the most recognition for? What do they ask about most often? Rubicon?

DR: Rubicon has happened. And that’s always a fun one, because I think about 12 people watched that show. So it’s fun when one of those 12 people recognize me. For a long time, people would recognize me for The L Word, and that’ll still happen. But these days, most often, people will come up to me and say, “Oh, you’re the brother on The Good Wife, right?”

CM: So do you spend a lot of time these days waiting for a call from the show’s producers to reappear as Owen Cavanaugh?

Roberts: Yeah, he pops up now and then. But as loath as I am to say it, I don’t think the show can stand him too often. Because he’s sort of a pressure valve for [the title character played by] Julianna  Margulies. What I’m really waiting for is the call telling me that they’re going to spin him off into his own show: The Bad Brother.

CM: Well, if that doesn’t work out, westerns are supposed to be making a comeback next season on TV. Maybe they’ll want to cast a true-blue Texan in one of the many proposed western projects they’re talking about?

CM: That would be fine by me. After 3:10 to Yuma, I’m like, “Oh, c’mon, put me on a horse again. Let’s do it.” I mean, 3:10 to Yuma was one of the ones that matched up exactly with what I thought was going to happen back when I was seven and wanted to be an actor. I had a horse and a gun. And there were actual moments when, where we were shooting it, you could actually see the Hollywood sign at the same time. That was really when I felt like, hey, I’m making movies.

Actor Dallas Roberts was born in Houston Photo via PacificCoastNews.com

Dallas Roberts gets chased by wolves in The Grey