"Having fun is in my blood"
Houston artist remembered for vibrant paintings and gentle spirit
LATEST NEWS
Where to eat in Houston: 11 bars that have reopened as restaurants
KHOU & CultureMap 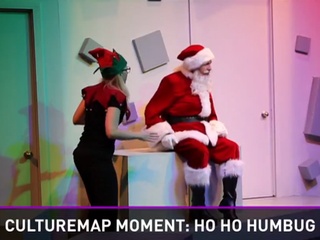 Stark Naked Theatre is bringing the joy and discomfort of the holidays right to you with their current seasonal production of Ho Ho Humbug. This week's KHOU CultureMap Moment highlights the play, loosely based on actor and playwright Scott Berkell's experience as a disillusioned New Yorker who finds himself portraying Santa Claus at an area Macy's store.

"The guy is maybe a bit cynical about the holidays and then his experiences at 'Santa Land' effect him in ways he wasn't expecting," says Berkell, who wrote and also stars in the play.

The snarky yet hilarious two-hour play takes place at Studio 101 at Spring Street Studios, with performances Monday and Tuesday at 7:30 p.m., with a final performance on Christmas Eve at 3 p.m.

"You're really close to the actors, so you can see their faces, see their reactions," says Joel Luks, CultureMap's resident arts and culture expert, of the intimate performance space, adding that the actors seem to feed off the audience's laughter and energy.

"The holidays are time to remind ourselves that there's good in humanity, and this play does just that," says Luks.