Following this high-profile couple through their glam days of galas and board meetings is tempting fodder for the LA producer. Paige Fertitta , Tilman Fertitta Photo by © Michelle Watson/CatchlightGroup.com 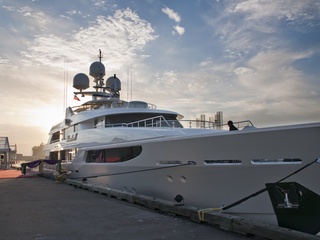 Tilman's yacht, The Boardwalk, could make a glamorous setting for at least one episode. Photo by © Michelle Watson/CatchlightGroup.com
Parties at the Fertitta River Oaks estate exemplify the good life at the top of the Houston food chain, making for great TV. Photo by Michelle Watson/LastNightPics.com 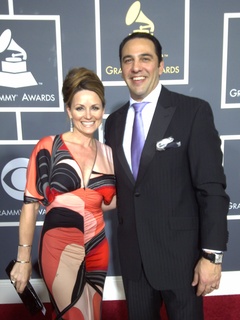 The glamorous Lucinda and Javier Loya would be great subjects for the luxe lifestyle documentary. Photo by Cameron Mathison (aka Ryan Lavery on "All My Children")

The Roses are old hands at reality TV and would surely welcome the cameras into their home. Cindi Rose , Dr. Franklin Rose Photo by Michelle Watson

Just when we thought that Hollywood had given up on Houston as a hotbed of reality TV possibilities, along comes yet another production company, a very serious one at that. And they are not looking for the Bickersons or the mad housewives of H-town. Think lifestyles of the rich and famous presented in documentary format.

Assistant producer Lisa Ferguson is on the prowl for just the right wealthy couple, one with enough discretionary income to make their neighbors drool with envy and with enough community connections and charitable involvements (read that writing big checks) to put them at the top of everyone's invitation list.

For those interested in auditioning for the spotlight, Lisa explains the qualifications. "We are casting for an upper-class family, who can exemplify what it means to live as a wealthy American. The documentary will provide a glimpse into your everyday life, from your home to work to social events and charities. Filming begins late August and ends early October."

"This will be very different from Real Housewives," she said. "There won't be any creation of fake situations."

The initial call came from LA only last week. Could we suggest candidates for such a show? Lisa explained that the goal is to capture the luxe life of a wealthy American family, in short to show the world how the top .1 percent of Americans live. "This will be very different from Real Housewives," she said. "There won't be any creation of fake situations."

While Lisa would be happy to hear from interested well-to-do parties (tvdocumentarycasting@gmail.com), CultureMap had a few suggestions for those to fill the starring roles.

Planes and boats and casinos

Who better to showcase the luxe life of Houston's rich and famous than self-made zillionaire Tilman Fertitta and his family? Think of the casting: the feisty, sometimes combative Tilman juxtaposed against his soft-spoken, genteel wife Paige. They could be filmed boarding their helicopter for a quick jaunt to Galveston where they would land on the helipad of his 164-foot yacht, The Boardwalk, for a sunset dinner with their four children.

The Fertitta family might be photographed at the Golden Nugget in Las Vegas or Atlantic City, which Tilman owns through his $4 billion Landry's Restaurants empire. Or discussing redecorating the condo in Vail or the farm just outside of Houston.

The Fertittas' close friendship with astronaut Mark Kelly and injured congresswoman Gabrielle Giffords could make for an interesting segment as would their dedication to their children's sports teams.

Charity involvements are paramount in the selection process, according to Lisa. And who wouldn't love to follow Paige and Tilman through their annual Mardi Gras bash in Galveston or their rocking benefit for the Houston Police Foundation or his work with Houston Children's Charity?

The energy mogul and the interior designer

Lucinda and Javier Loya have to be one of the most glamorous, most popular couples in the city. Loaded with good looks, blessed with two beautiful daughters and self-made millionaires, this couple rocks.

The spunky Lucinda has frequently been on reality TV radar in the last year or so and as a successful interior designer with clients in New York, Aspen, Houston and beyond. And she has expressed interest in the possibility. But the tone of the program has to be just right. If what Lisa tells us about the "documentary" is accurate, then this could be the ticket for the Loyas, though Javier, Choice Energy president and CEO, is basically camera shy — particularly when it comes to anything smacking of "reality" TV.

But following this handsome, well-connected couple through their daily rounds would be total escapism into a higher realm of realtiy. Wouldn't you love to join them in their suite at Reliant Stadium for one of the Houston Texan games? (He's a minority owner.) Or hook up with them at this fall's March of Dimes Signature Chefs fundraiser? (She's a big March of Dimes supporter and up this year for Best Dressed Hall of Fame.) And let's not forget their fab parties in their killer contemporary home, the stuff of dazzling documentary footage.

They are just too good looking, too hip and too interesting to fail to make the final cut in this producer's considerations.

What would a reality TV casting call in Houston be without Cindi and Dr. Franklin Rose? After all, they know the drill better than anyone.

Daughter Erica Rose has parlayed her 15 minutes of Bachelor and You're Cut Off fame into at least an hour. All three have done stints with Dr. Phil. And the family is more than willing to put their best faces (he is after all a plastic surgeon) forward for a little TV fun. And don't forget the handsome, elegant son Ben Rose, a law school grad who only occasionally steps up to the camera.

We could follow them through a typical day at Franklin's Utopia Plastic Surgery and MedSpa, where the girls occasionally hang out. We could join them on a jaunt to their vacation home in Aspen. And we could observe as Cindi works her magic cutting silhouettes for charity as she did at a recent black-tie gala. And the family's work with the Rose Ribbon Foundation would surely give them the philanthropic cred necessary to win this slot.

Give us your suggestions

The city is loaded with likely subjects for a champagne-and caviar-fueled documentary. Loads have private jets, multiple homes, mega yachts and black American Express cards. The challenge is to find just the right mix of bravado and sophistication, Texas chutzpah and Houston glam.

The glamorous Sheridan and John Eddie Williams come to mind as do Elizabeth and Gary Petersen and perhaps Susan and Mike Plank.

While the candidates might be many, finding a family actually willing to put it all out there is another matter. Who do you think should get the starring role as H-town's leading, enormously rich family?

Following this high-profile couple through their glam days of galas and board meetings is tempting fodder for the LA producer. Paige Fertitta , Tilman Fertitta Photo by © Michelle Watson/CatchlightGroup.com

Tilman's yacht, The Boardwalk, could make a glamorous setting for at least one episode. Photo by © Michelle Watson/CatchlightGroup.com
Parties at the Fertitta River Oaks estate exemplify the good life at the top of the Houston food chain, making for great TV. Photo by Michelle Watson/LastNightPics.com

The glamorous Lucinda and Javier Loya would be great subjects for the luxe lifestyle documentary. Photo by Cameron Mathison (aka Ryan Lavery on "All My Children")

Harris County connects students in need to free internet and devices
Rodeo lassos up $1.2 million in aid to Texas college students
Southern Smoke blows into the Windy City with $4 million in aid

Getting spicy with Pondicheri's owner, plus fine sips at Musaafer
Get to know Houston's deli man, plus fresh seafood near The Heights
Houston's most luxurious supper club, plus Spanish fare in Bellaire