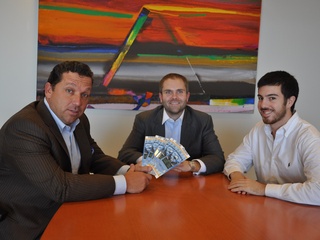 Tony Buzbee, left, is the happy man with six front row, 50-yard line Super Bowl seats thanks to Pat Ryan and Nick Cubero, right. Photo by Shelby Hodge
Fans will pay $300 each for a place outside of the stadium for the Super Bowl. Photo courtesy of Arlington Convention & Visitors Bureau
Houston's Mimi Swartz goes after the legacy of John O'Quinn in the current Texas Monthly. Photo by Fulton Davenport
Elyse and Bob Lanier Photo by Bill Olive

Trial lawyer and philanthropist Tony Buzbee is one happy man. On Thursday, he received his tickets for the Super Bowl at Cowboys Stadium — six front-row seats at the 50-yard line. How sweet it is.

Credit goes to Pat Ryan and Nick Cubero, co-owners of The Ticket Experience, the Houston-based, five-year-old ticket brokerage firm that has been catering to Buzbee's sports enthusiasms for the last two years.

While the cost of laying your hands on Super Bowl tickets, according to Ryan, currently ranges from $2,200 to $500,000 for a suite, Buzbee paid a cool $12,000 each for his prize seating. Joining him at the 50-yard-line will be his wife and two of their four children and two close friends from Florida.

While that stratospheric price is considerably more than the face value on the tickets ($1,200 each), Ryan assures that Buzbee got a bargain compared to what other brokers will be charging around the country. In fact, according to Ryan, no other front-row seats have hit the market yet.

Cubero started working his contacts for the choice seating when there were four teams left in the running, even though Buzbee had not yet ordered the tickets.

"I don't plan ahead," Buzbee said, which is why he counts on Ryan and Cubero. "I don't think there's ever been a time when these guys couldn't get me what I wanted."

Ryan and Cubero are already working on Buzbee's tickets for the Final Four and they have assisted his wife with theater tickets.

And, if he were so inclined, which Buzbee emphatically says he is not, the duo says it could get him one of the highly coveted tickets to the Super Bowl Maxim party for a mere $1,000. How possibly to an invitation-only party?

"We have people who owe us favors," Ryan explained.

Texas Monthly executive editor Mimi Swartz takes on the good, the bad and the ugly of the late trial lawyer John O'Quinn's life and aftermath in the magazine's current issue. In a tantalizing investigation, Swartz focuses on Darla Lexington's claim that she and O'Quinn were husband and wife and that she therefore is entitled to his fortune, a will to the opposite notwithstanding.

As the magazine's on-line promo reads, "During his lifetime, he captivated Houston with his courtroom brilliance, outsized ambition, and high-dollar lifestyle. But in the year since John O’Quinn’s tragic death, a bitter estate battle has revealed who he really was."

Set aside some time for this one because once you start reading, you won't be able to put the magazine down.

End of an era

What else could it be when Marty Stein, agenda director for the Mayor's office for more than a decade, decides to retire? More than 200 fans gathered at the Hobby Center mezzanine on Thursday to salute the woman who has served under four Houston mayor's. Two of those, Mayor Annise Parker and Bob Lanier, were among the well-wishers.

Some say that Stein has had the toughest job at City Hall, wrangling votes from City Council members for the mayor, and that she managed to consistently handle the task with style, patience and intelligence.

The magic of e-mail

"Reflections on Style" luncheon chair Linda McReynolds is still astonished at the power of e-mail in the Old Guard social ranks, where one might consider that pen and ink and engraved invitations were the keys to fundraising success.

Last July, she sent out a save-the-date e-mail to those who might be interested in underwriter tables, priced from $5,000 to $25,000, for the April 12 luncheon benefiting the Salvation Army and honoring former First Lady Barbara Bush. In less that four weeks, to her delight McReynolds had to close the reservations. And by the first of November, all of the tables were reserved with cash deposits.

Now the luncheon chair is scrambling to find more room at River Oaks Country Club to up the luncheon's success even further. "As chairman of this event," she wrote in pen and ink, "I am truly blessed to have so many people who love Mrs. Bush, the unique style show, Chic Boutique and the Salvation Army."

Tony Buzbee, left, is the happy man with six front row, 50-yard line Super Bowl seats thanks to Pat Ryan and Nick Cubero, right. Photo by Shelby Hodge
Fans will pay $300 each for a place outside of the stadium for the Super Bowl. Photo courtesy of Arlington Convention & Visitors Bureau
Houston's Mimi Swartz goes after the legacy of John O'Quinn in the current Texas Monthly. Photo by Fulton Davenport
Elyse and Bob Lanier Photo by Bill Olive