Food for Thought
Houston's worst kitchen disasters: From the Apple store beam that crashed into Sprinkles to more

Foodie News
Stella Sola says so long to Adam Dorris: Is the Heights restaurant a chef-maker?
LATEST NEWS
Here are the top 8 things to do in Houston this weekend
Foodie News 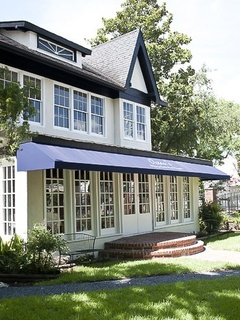 The current Ocean's restaurant is the site of the forthcoming Concepción. Ocean's Restaurant/Facebook

After weeks of rumors, Jonathan Jones has announced that he is creating a new concept in the former Ocean's space.

Making the announcement on Southbound Food, Jones described the concept, called Concepción, as "modern, higher-end foods . . . with Latin American, Caribbean and Mexican flavors," noting that he'd be focusing on lighter, coastal fare and that "ceviche will be king."

Jones is partnering with Jorge Alvarez, the owner of Ocean's, as well as service manager Matthew McLaughlin. The name Concepción refers not only to birth (or in Jones' case, a "rebirth" after he was let go from Xuco Xucana and Beaver's) but is also an homage to Alvarez's mother — it was her first name.

Jones spoke highly of the location, a stately converted two-story house built in the late 19th century, which is known for its large, jasmine-scented patio. But with Houston's unpredictable patio weather, Jones also has plans to use the upstairs space as a full-service bar and lounge with food service and late night bites.

Concepción is set for a May soft opening (look for a Cinco de Mayo party if everything goes according to schedule) and an official debut in June.

Are you looking forward to Concepción? Does Jonathan Jones now have the best patio in town?

The current Ocean's restaurant is the site of the forthcoming Concepción. Ocean's Restaurant/Facebook