Worth more than Cowboys?
A new round of special vanity license plates to sell for big bucks: Reveal includes Texans plate

CultureMap Auto Awards
The Hot Hatch of the Year: Fiat 500 Abarth is a little car that elicits big smiles — and a growl
LATEST NEWS
Here are the top 15 things to do in Houston this weekend
Social media woes 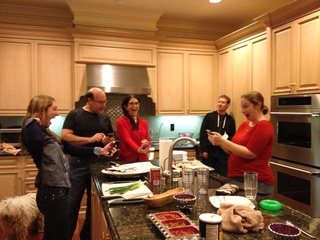 The photo features the Zuckerberg family gathered around their kitchen counter for holiday festivities and making exaggerated faces as they play with their smartphones, allegedly having fun with Facebook’s new  “poke” app. Callie Schweitzer/Twitter/BuzzFeed.com

It's no secret that Facebook's privacy settings can be somewhat difficult to navigate. Despite multiple attempts to simplify the process of controlling who sees your information, it's still easy to get tripped up by the complex preferences — even if you're a former Facebook executive.

Randi Zuckeberg, former director of market development for Facebook and sister of co-founder Mark Zuckerberg, was recently surprised to find a family photo she uploaded to her personal page making the rounds on various blogs and social media sites.

The photo features the Zuckerberg family gathered around their kitchen counter for holiday festivities and making exaggerated faces as they play with their smartphones, allegedly having fun with Facebook's new  "poke" app.

"Digital etiquette: always ask permission before posting a friend's photo publicly. It's not about privacy settings, it's about human decency."

Callie Schweitzer, a New York based marketing executive, found the photo particularly amusing and posted it to Twitter. Once Randi Zuckerberg saw the photo surface online, she angrily tweeted Schweitzer, writing, "not sure where you got this photo. I posted it only to friends on FB. You reposting it on Twitter is way uncool."

Schweitzer responded, stating that the photo happened to show up at the top of her news feed and she found it funny. "I’m just your subscriber and this was top of my newsfeed," she wrote. "Genuinely sorry but it came up in my feed and seemed public."

But Zuckerberg, who most recently produced Startups: Silicon Valley on Bravo, didn't upload the photo to her 1.4 million subscribers. She posted it on her personal profile, and she and Schweitzer are not Facebook friends.

The squabble was resolved relatively quickly, when Zuckerberg realized that Schweitzer most likely saw the photo because she's friends with Zuckerberg's sister. While fellow tweeters quickly chalked the incident up to Internet privacy issues, Zuckerberg insisted otherwise.

"Digital etiquette: always ask permission before posting a friend's photo publicly," she wrote on Twitter. "It's not about privacy settings, it's about human decency."

Public outcry ultimately caused Instagram to retract the clause — but situations like the one Randi Zuckeberg found herself in remind us that our Internet privacy isn't always as guaranteed as we would like to believe.

While a new drop-down menu is designed to make Facebook privacy settings more accessible, it's still easy for photos to slip outside of our sights. Even if you un-tag yourself from that photographic evidence of last night's drunken shenanigans, it still may be out there for your sister's friend to see.

How Children’s Memorial Hermann Hospital gave one boy a normal heart
Memorial Hermann offers 9 healthy habits for the New Year
COVID-19 vaccine for kids ages 5-11: What you need to know.