The adventures of Drum Man and Mr. Darcy: ROCO-featured Matt McClung travels the earth for music

The adventures of Drum Man and Mr. Darcy: ROCO-featured Matt McClung travels the earth for music 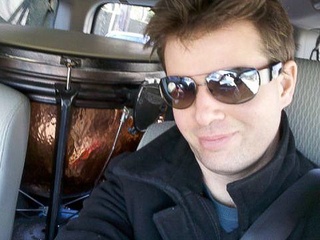 ...packs his car with a myriad of pecussion instruments and travels to Houston to perform as principal of his section with the River Oaks Chamber Orchestra... Courtesy of Matt McClung

...in this weekend's season opener concert, he returns to the instrument that began his journey with music. Courtesy of Matt McClung

The drum set, which has a featured solo in one of ROCO's pieces.
But we can't tell you which one it is. As part of every ROCO concert, there's a surprise.

The drum set. Loved by teenagers, loathed by parents and neighbors. Its mere sight evokes images of a player, sticks in hand, beating the crap out of them in reckless abandon, followed by a thunderous worship-like ovation from the listening crowd.

Doesn't everyone, at some point in their life, dream of being an idolized rock star?

Though richness and infamy isn't the fate of every percussionist, the drum set and the lifestyle it conjures up, more often than not, is the entry point into learning to play the family of instruments that are hit, shaken, rubbed or scraped.

Meet percussionist Matt McClung. In a nutshell, this is his story.

At a cozy "Upstairs with ROCO," hosted at the offices of the River Oaks Chamber Orchestra recently, the rhythm virtuoso sat informally behind his newly acquired trap set — which included a ride cymbal aptly named Mr. Darcy after the character in Jane Austen's novel Pride and Prejudice — and in scintillating, witty Victor Borge-style, he went off the cuff, played and confabbed with a curious coterie seeking to learn, laugh and share in the experience.

"When I first hit Mr. Darcy, his sound was awful to my ears," McClung says. "But as I kept on testing different cymbals, he grew on me. I had to have him."

Since July, McClung has been studying the instrument that began his journey into his chosen field and profession. The trap set has a featured percussion break in the middle of one of the works on ROCO's season-opening concerts set for Saturday and Sunday.

"The musicians in ROCO are unique and multi-talented in their ability to play their chosen instrument at the highest level professionally and at the same time to talk and share with audiences their own journeys, inviting people into the joy of communicating through music," Alecia Lawyer, ROCO's founder and principal oboist, says. "ROCO focuses on the artistic development of each of our musicians. We give opportunities to try something new, stretch in virtuosity and experience and take those risks in preparation and performance that give us our own chills to further draw you into our world."

"When I first hit Mr. Darcy, his sound was awful to my ears," McClung says. "But as I kept on testing different cymbals, he grew on me. I had to have him."

We can't reveal the name of McClung's season-opening concert work. The piece is a surprise, a feature of every ROCO performance. And to get it just right, McClung is OCD restless to learn all that he can.

"To prepare for this concert, I bought several drum set method books, took a lesson with an old-school drummer and probably watched 40 or 50 videos on YouTube and other websites," McClung says. "I bought a used kit and furnished it with new drum heads and new cymbals — including Mr. Darcy.

"I practiced several hours a day, including sight-reading, playing along with recordings, playing exercises from the method books and improvising. I also built up my footwork abilities by putting two pedals under my desk and watching several seasons of 24 on my desktop computer while repeating foot-pedal patterns over and over."

As an assistant professor of music at Texas A&M University-Corpus Christi, McClung continues to practice constantly to be in best shape for his students and to perform with such notable groups as the Hong Kong Philharmonic, San Antonio Symphony and Corpus Christi Symphony. He's also a chamber musician with Elemental Percussion, Strike 3 Percussion, So Percussion and cellist Alisa Weilerstein, and a principal of the section with the River Oaks Chamber Orchestra.

McClung has gone as far as earning a Presser Award to travel to a remote village in Ghana, West Africa to master the drumming techniques of the Ewe Tribe and commission a gyil, an African pentatonic xylophone popular in the Gur-speaking regions of Ghana and Burkina Faso, made from African hardwood and calabash gourds.

The trials and tribulations of getting such a gyil home deserves its own Comedy Central made-for-TV movie.

The trials and tribulations of getting such a gyil home deserves its own Comedy Central made-for-TV movie. Amid day-long excursions to find a cardboard shipping box, fees (bribes) and "consultants," the gyil appeared on a Chicago dock months later.

For a gent that plans, studies diligently and prefers reservations over just winging anything, McClung's stint in West Africa and his tryst with the drum set have a lot in common.

"Playing the drum set is different than orchestral playing in several ways," he says. "First, drum set involves feet. I haven't had to use my feet to play an instrument in any meaningful way since I was in junior high. In order to play the kit, your feet have to be powerful, delicate, sensitive and very precise. Mine weren't, and I knew it, so I had a lot of work to do to get them ready."

"Also, as a drum set player, you have to lead the ensemble rhythmically regardless of whether the ensemble is a rock band, a jazz ensemble or an orchestra," McClung says. "Classical playing requires that in limited ways, but when you're a drummer it's much more significant. I'm used to orchestra parts, which are not to be deviated from in any way. Of course we all add our own musical personalities to the notes we play, but we never add, subtract or change what's on the page.

"But Alecia always encourages us to take chances in ROCO. Hopefully she won't change her mind after she hears me take a drum solo!"

When he travels from his home in Corpus Christi to Houston, McClung crams his vehicle with a myriad of instruments. For a second time, that will include his trap set and Mr. Darcy.

...packs his car with a myriad of pecussion instruments and travels to Houston to perform as principal of his section with the River Oaks Chamber Orchestra... Courtesy of Matt McClung

...in this weekend's season opener concert, he returns to the instrument that began his journey with music. Courtesy of Matt McClung