Links We Love
How hot sauce can perk up your life; Netflix plans for drone delivery 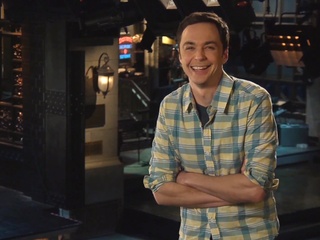 Being able to host SNL is a huge honor for any celebrity, but Parsons — never one to brag — says he doesn't feel like he deserves to host the show on March 1.

"It feels like I'm ruining the club that they created," Parsons cracked on NBC's Today Show. "You know what I mean? You grow up going, 'That's some Hollywood royalty that gets to host that.' Apparently I was wrong, 'cause here I am."

Parsons — never one to brag — says he doesn't feel like he deserves to host the show.

While others might be terrified by the idea of performing a live television show, the 40-year-old actor isn't even remotely scared.

"I love live [television]," Parsons said. "We tape [Big Bang Theory] live, and while you do get a chance to go over your mistakes there, should you make one, we are doing it live. And I love theater. I've done theater all my life. So this is ... not that it's like theater. It's different, but live is fun."

Although he is known primarily for his role on television, Parsons loves the stage. It was at Klein Oak High School in Spring that he first discovered his love of theater, and he attended the University of Houston to hone his skill. While at UH, Parsons was a founding member of the successful local theater troupe Infernal Bridegroom Productions.

"To this day, I've probably done the majority of my acting in Houston," Parsons told the Houston Convention and Visitors Bureau.

If you're a fan of the show, you can surely expect at least one "Bazinga" included in Parsons' SNL night this Saturday.