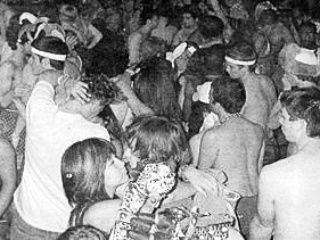 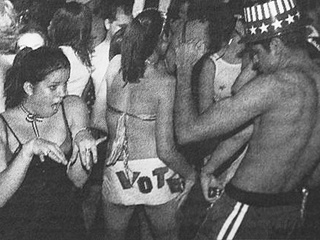 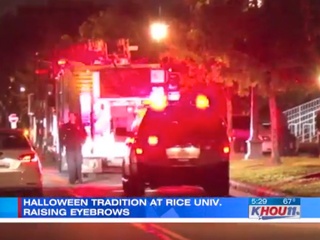 More than 10 Rice students were hospitalized during this year's annual party. Photo courtesy of KHOU Houston/Channel 11 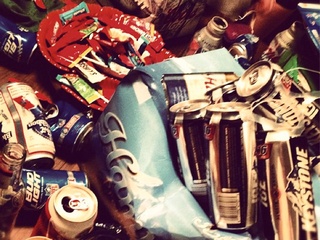 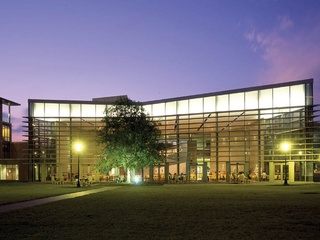 More than 10 students were hospitalized due to binge drinking during Rice University's Night of Decadence party — an annual event so happening that it reportedly received shout outs from both Playboy and Rolling Stone in the 1970s. (Some dispute this claim.)

Houston Fire Department ambulances were called on Saturday night to assist revelers who required medical attention for alcohol consumption, according to university spokesperson B.J. Almond. Officials say the 11 people were transported to the hospital from Wiess College, the Rice residence hall that hosts the approved on-campus bash. The students were all released early Sunday morning.

“That is a large number. It is larger than it has been historically by a large amount actually, so we are concerned about that."

“That is a large number," dean of undergraduates John Hutchinson tells KHOU Ch. 11. "It is larger than it has been historically by a large amount actually, so we are concerned about that."

Rice authorities were unable to verify the ages of those hospitalized, but assumed some were underage.

"Alcohol abuse is a serious problem on college campuses across the country," Almond tells CultureMap. "Rice has been extremely active in educating students about the dangers of abusing alcohol."

The Night of Decadence, or "NOD" for those in the know, has been a beloved Rice tradition since 1972 and now attracts more than 1,000 students and young alumni each year.

Official themes were ascribed in 1976, starting with a series of historically-minded subjects like "The Fall of Rome" and "Caligula" before devolving into "James Bondage" and "A Night in NODdingham: Bring Your Stiffest Arrow."

The Night of Decadence has been a beloved Rice tradition since 1 972.

This year's party took a vintage videogame theme with "NODtendo 69: Blow My Cartridge."

In 1999, after numerous complaints, a university panel decided to bolster security at Night of Decadence and place restrictions on overtly-sexual party decorations.

More than 10 Rice students were hospitalized during this year's annual party. Photo courtesy of KHOU Houston/Channel 11