Tattered Jeans
A lucky break? Long road back from knee injury leads to crisis of confidence — and blessings, too 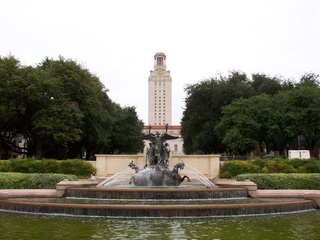 Abigail Fisher wanted to attend the University of Texas at Austin but ended up at Louisiana State University instead.  Photo Courtesy of Red Sully/Wikipedia

Abigail Fisher maintains she was excluded from UT's class of 2012 because of her race.  The Diamond Blogs

Abigail Fisher graduated from Louisiana State University in May. Of course, if she'd had her way, Fisher never would have left Texas. In 2008, Fisher was denied admission to the University of Texas at Austin. Shortly thereafter, she filed a lawsuit against UT, alleging that her race was an unfair factor in her rejection.

In 2004, UT revamped its admission policy to allow race to be a factor in the holistic review of students outside the top 10 percent.

Fisher v. The University of Texas at Austin has made it all the way to the Supreme Court, where oral arguments will be heard on Wednesday.

Since 1997, Texas students graduating in the top 10 percent of their high schools have been guaranteed admission to state universities.

Fisher did not graduate in the top 10 percent, but she maintains that lesser qualified minority students were accepted at UT the same semester she was rejected. This is a possibility, given that in 2004 the University of Texas revamped its admission policy to allow race to be a factor in the holistic review of students outside the top 10 percent.

For its part, UT maintains race is a modest factor in the overall admissions process and that more than 150 minority applicants with academic credentials similiar to Fisher's were also denied acceptance to the school in 2008.

The most recent university admissions case that went before the Supreme Court was Grutter v. Bollinger in 2003. The court upheld the University of Michigan Law School's policy by one vote.

Keep up with oral arguments in the Fisher v. University of Texas case on the SCOTUS blog.

Abigail Fisher wanted to attend the University of Texas at Austin but ended up at Louisiana State University instead.  Photo Courtesy of Red Sully/Wikipedia