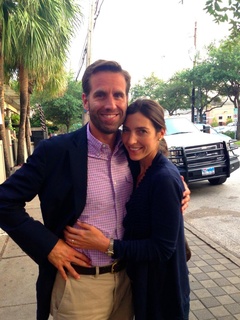 Beau Biden and wife Hallie. He tweeted this photo from Houston. Twitter 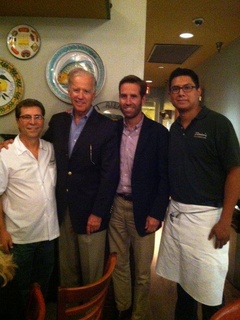 Delaware Attorney General Beau Biden, son of Vice President Joe Biden, is in Houston undergoing medical tests after he was hospitalized last week. CultureMap has learned that Biden, 44, is currently at M.D. Anderson Cancer Center. A hospital spokeswoman declined to confirm or deny if Biden is a patient at the world renowned cancer center.

"I don't have any information for you on that," she said in a brief phone conversation.

Tuesday morning Beau Biden tweeted a photo of him with his wife in Houston.

Touched by all your well wishes--thank you. Nice evening in Houston w/ Hallie; will share update when we have it. -bb pic.twitter.com/n1iT7oUHHM

D'Amico's Italian Market Cafe in Rice Village posted a photo of father and son with owner Nash D'Amico that was taken after they dined there Monday night.

The White House confirms that the vice president traveled to Houston and will stay with his son through Tuesday. As of Monday, Biden planned to keep his scheduled appearance with President Obama in Scranton, Penn., later this week.

Beau Biden was admitted to Northwest University Hospital in Chicago last week after suffering weakness and disorientation. After consulting with his physician at Jefferson University Hospital in Philadelphia, Delaware Department of Justice spokesman Jason Miller confirmed that he traveled to Houston for medical tests.

Biden, who has served as Delaware's attorney general since 2007, suffered a mild stroke in 2010.

Beau Biden and wife Hallie. He tweeted this photo from Houston. Twitter