Texas 'n' Taxes
It's good to be a Texan during tax season; state ranks low in tax bill

Massive fire burns down a controversial Montrose apartment complex, engulfing the city in smoke and ash 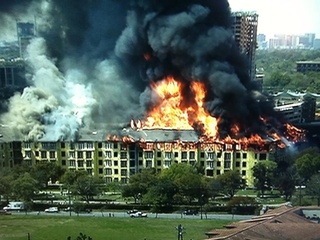 A four-alarm fire is consuming an under construction apartment complex on West Dallas.  The Bishop/KHOU/Twitter

The Houston Fire Department waged war on a massive, five-alarm fire at an under construction apartment complex on West Dallas between Montrose and Waugh. Portions of the building collapsed due to the fire and Montrose went into a virtual standstill with huge traffic jams Tuesday afternoon.

A CultureMap staffer driving in the area had ash falling on her car and says that the smell of smoke is "overpowering."

More than 70 fire department vehicles responded as the blaze keeps growing. It was officially upgraded to a five-alarm fire at 1:25 p.m. after starting out as a three-alarm fire in its first reporting at around 12:30 p.m. At around 3 p.m., the fire was declared under control. By then, a huge portion of the complex had burned to the ground.

"I saw the flames. I just started yelling, 'Out out, everybody get out,'  as much as I could in Spanish and in English."

Construction workers were in the building when the fire started, but Houston Fire Department officials believe all the workers safely got out.

A worker on the site, who asked not to be identified, told CultureMap, "I was on the backside of the building outside and I saw smoke come up from the building and I ran into the opposite side to see what was going on. I saw the flames. I just started yelling, 'Out out, everybody get out,'  as much as I could in Spanish and in English.

"I ran back to the other side of the building to see what was happening and make sure that my crews were out. Made it into the garage just in time to get all the cars out . . . I think pretty much all the cars made it out and as far as I know everybody made it out too."

Twitter exploded with multiple pictures of the blaze, which is billowing black smoke that can be seen throughout central Houston. KHOU reports that Montrose is closed between Allen Parkway and West Dallas. Several TV stations aired live coverage of the fire and the increasingly frantic efforts to control it.

The units appear to be part of 2400 West Dallas, a JLB development being built just feet away from a more than century old cemetery. The location has brought its share of controversy with vocal opponents voicing their displeasure over building something so close to grave site that opened in 1884.

There is no word on what started the fire yet. No injuries have been reported.