A 92-mile trek
Along for the trail ride: Horses, wagons, red iPods and a space stop make for a rollicking Rodeo tradition

Is stealing someone's drink out of a refrigerator a crime? It is in some places.
Click2Houston 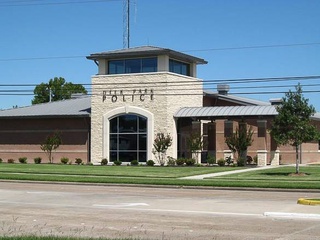 The Deer Park Police Department caught a lunch bandit in its ranks. Topix

In a normal office, a refrigerator raider might be met with a passive-aggressive note. But a police station takes disciplinary action much more seriously.

As KPRC-2 is reporting, Deer Park police chief Gregory Grigg had heard enough complaints from victims of lunch theft. So, after nearly a year of items disappearing from the department fridge, he set up a sting operation.

Grigg stocked the fridge with Monster Energy drinks, set up a hidden camera and waited for the perpetrator to take the bait.

"I think it will be a long time before we have anything missing out of the Deer Park Police Department refrigerator after this event," Grigg said.

Video footage showed that someone on the inside was responsible: Patrol officer Kevin Yang, a three-year veteran of the force.

Though Yang didn't admit culpability for the other incidents, he was given a 30-day suspension from the Deer Park police department (totaling approximately $4,500 in lost pay) and slapped with a class C misdemeanor charge, punishable by a fine.

"I think it will be a long time before we have anything missing out of the Deer Park Police Department refrigerator after this event," Grigg told KPRC.

What say you? Is this a satisfying story of justice served, or a silly use of the department's resources?

Is stealing someone's drink out of a refrigerator a crime? It is in some places.
Click2Houston