Beyond the Boxscore
Ed Reed stands up to Barack Obama: Questioning Texans heart is absurd

This American citizen is now the poster child for youthful wisdom in the face of ignorance. Facebook

When an 11-year-old kid stepped in at a moment's notice to belt out the "The Star-Spangled Banner" before Game 3 of the NBA Finals in San Antonio, little did he know that he would take center stage in a national quarrel that erupted on social media.

You may remember Sebastien De La Cruz as the charming chap from last year's season of America's Got Talent. Cruz, who replaced Darius Rucker, lead singer of Hootie & the Blowfish, for the Game 3 national anthem, wore a traditional mariachi uniform for the performance. His "fashion statement" — not his signing (listen to the little dude's vocals in the video above) — incited hateful racist posts on Twitter.

This American citizen born and raised in San Antonio is now the poster child for youthful wisdom in the face of adult ignorance.

He responded to statements that questioned his place of birth solely on the basis of physical appearance . . . 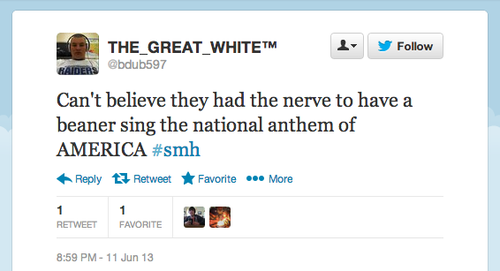 . . . and bullying with clueless judgments about the complicated issue of immigration. So much for the land of the free.

In an interview with San Antonio's KENS 5, Cruz said he knows better than to listen to hateful words.

It didn't take long before the singer's supporters came to his rescue, many of whom pledged to wear traditional mariachi attire for Thursday's game. And yes, the 11-year-old Cruz was back at the arena, singing the national anthem again before Game 4.

And he delivered another powerful performance despite the increased scrutiny. There's little doubt that an 11-year-old is the big winner of these NBA Finals so far.

This American citizen is now the poster child for youthful wisdom in the face of ignorance. Facebook