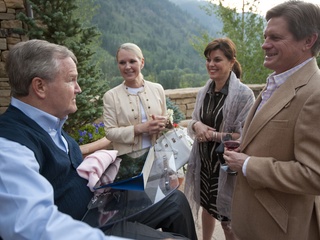 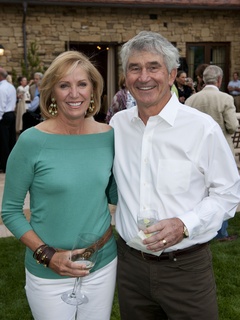 Even in the final throes of summer, the lure of Aspen and its deep-pocketed residents flourishes. A Memorial Hermann team was in that posh mountain resort on Friday for a gathering aimed at raising awareness and funds for the Staman Ogilvie Fund for Spinal Cord Injury, Recovery, Research and Rehabilitation.

Polly and Murry Bowden opened their Rocky Mountain aerie for more than 80 guests who heard remarks by Memorial Hermann CEO Dan Wolterman and Dr. Dong Kim, co-director of Memorial Hermann's Mischer Neuroscience Institute, on the hospital system's "Revolutionizing Neuroscience" initiative. The Ogilvie Fund was established to raise $10 million in that effort. Staman gave the final remarks, sharing his experience as a victim of spinal cord injury.

That would be the members of PULSE, St. Luke's Episcopal Hospital's young professional group, who gathered at the R-NOL-D ranch in Brenham for the first core-committee retreat. PULSE co-chairs Lindley and Jason Arnoldy treated the group to a festive afternoon of food and drink, that alone would make membership worth the entry fee.

Cuteheads, the online young children's clothing entity founded by Houstonian Esther Freedman, gathered supporters last week at Dessert Gallery-Kirby for a "sip and shop"evening. The event was as much a sugary treat for the sweet tooth as a visual treat for shopping moms. Cupcakes, brownies, cookies and a two-tiered version of Dessert Gallery CEO Sara Brooks' famous Diner Cake were served.

Interior designer Bill Stubbs has thrown his design clout behind a special charity auction, "Home Is Where the Heart Is," benefiting Boys & Girls Country of Houston and the preview party unveiling the $1 million worth of furnishings and acccessories takes place Thursday, 6 p.m. at Lewis & Maese Auction Co.  See the catalog of items here.

The party includes the exhibit of more than 200 lots of new, name-brand items (Brown Jordan, Century, Christopher Guy, etc.) that will be auctioned Wednesday, Aug. 29. As a treat for preview party guests, a collection of smaller accessories will be available for sale. Tickets for the preview are $20. The auction itself is open to the public.

What better place for a college alumni sports dinner than the Houston Texans Grille? That's where supporters of the Texas Tech Red Raider Alumni Association gathered the other night for a scholarship dinner that featured pep talks and sports insights from five local sports personalities.