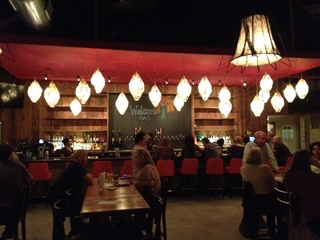 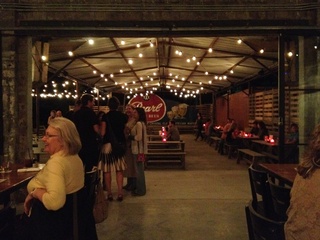 The smell of fresh paint didn’t detract from the warm, welcoming vibe of Cottonwood, the latest bar to open in the up-and-coming Garden Oaks neighborhood, as draped strands of light formed a canopy over friends and family playing washers, bags and bocce on one of the three patio areas.

Owners Charles Bishop of Liberty Station and Rob and Sara Cromie of Picnic and The Raven Grill are taking full advantage of vast square footage. The front of the new gastropub is a 2,000-square-foot space that is quiet and calm. On the other side is the 4,000-square-foot “gaming patio” that features an elevated stage that will host a diverse mix of live music acts.

Cottonwood has the rustic, almost beach-like character of Liberty combined with the warm yet polished ambience of Raven. Older couples won’t feel out of place, and the younger crowd can still relish in the relaxed atmosphere that makes Liberty so popular. The owners say that's exactly what they had in mind.

“We can go to St. Arnold’s and say, ‘Hey, do  this and that to Santo,’ and have something that you won’t find anywhere else,” Bishop says.

“Some of our friends have 6-year-olds, and they can come here for dinner after work or come later on at night for drinks and live music,” Bishop says.

Instead of the space's formerly phallic name (Gilbert Drive Shafts), the owners decided to honor the Alamo-shaped façade of the building by naming it after the literal Spanish translation of Alamo, the Cottonwood tree. The owners also maintained some of the original building and Southern flair by reclaiming wood from the second floor of the  former mechanic shop.

“We thought about keeping the old name but decided to go with something more family-friendly,” Rob Cromie says with a laugh.

That reclaimed wood serves as the backdrop for the fully stocked bar, which features 33 taps, two of which are beer engines that pour cask editions.

The specialized taps aren’t the only way the owners show craft beer some extra attention. The new spot owns its own cooperage, so they can send an individual keg out to local microbreweries with special requests, like a dry-hopped IPA or a wood-aged version of a popular brew.

“We can go to St. Arnold’s and say, ‘Hey, do this and that to Santo,’ and have something that you won’t find anywhere else,” Bishop says.

One marked difference between Bishop’s Washington Avenue bar and this new spot is the kitchen and impressive seasonal menu. Instead of the regularly rotating food trucks at Liberty, Cottonwood has poached Uchiko chef Daniel Ajtai from Austin to form a menu of gourmet comfort food including salmon deviled eggs, BBQ oysters, pork belly corndogs and pumpkin-spiced doughnuts.

The menu was intended to offer shareable portions with a gourmet twist.

“It’s the same neighborhood feel as Liberty Station but with food and more families here,” Bishop says. “There is nothing like this here!”

Until now: Cottonwood officially opened to the public on Tuesday, and the bocce players are already imbibing.

Power to the patio: There's bocce and more on Cottonwood's spacious patio. Photo by Darla Guillen