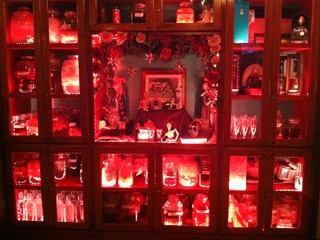 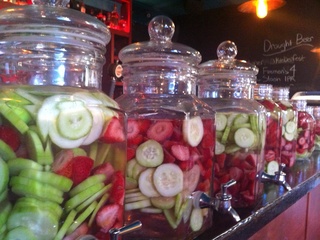 Whatever it is, it's awesomesauce. We stopped by this new barely inner-Loop bar by the same proprietors of Dirt Bar for a taste of some tacos, but mostly for the tequila infusions, which we were initially both intrigued and terrified by.

Vodka infusions are one thing. A spirit designed to taste like nothing seems the perfect palate upon which to heap other flavors. Tequila, on the other hand, has a distinctive taste all its own, and I wondered how it would fare in something like an Apple Pie Margarita.

As it turns out, there's nothing more American than apple pie and tequila, which seems strangely fitting — especially for Houston.

The rotating menu of infused tequilas — which when we were there, included new additions beet and bacon in addition to cantaloupe; cayenne, sea salt and roasted Texas pecan; habanero ginger, and others — can be served as shots, on the rocks, in margaritas or mixed into other cocktails, depending on their flavor profiles. We dabbled in a little bit of everything, and we couldn't imagine settling for just one on a return visit.

Next up was the single best margarita I've ever had in my damned life: The cayenne pepper, sea salt and Texas pecan margarita.

All the infusions start with a silver tequila base; we kicked it off with a lemongrass, ginger, and Madagascar vanilla-infused tequila press. The result was sweet, but amazingly light, with the thick vanilla counterbalanced by the ginger and neither stealing the spotlight as they sometimes can. Next up was the single best margarita I've ever had in my damned life: The cayenne pepper, sea salt and Texas pecan margarita. Not usually one for serious spice, the cayenne was perfectly mellowed by the other ingredients, and the bite hit me in the nose instead of on the tongue, leaving me free to enjoy the food.

I should mention that the grub (the menu was created by Greg Lowry during his break between Voice and Triniti) is good. We had great snapper and classic ground beef tacos and a healthy portion of their guacamole, which was somehow lighter and creamier than most, but let's be honest — we're all about the booze. So let's get back to that.

The beet margarita, of which I was perhaps most skeptical, was as rich and earthy tasting as it was colored — like rust. It was pleasant, I think, although my taste was brief. My dining partner snatched it away, declared it the favorite and drank it dry before I could protest.

Before we moved on to straight shots of the infusions, we tried one non-infused cocktail from the menu. This blueberry, jalapeño and cilantro margarita, made with regular old non-infused tequila, was lovely in its presentation, but it didn't stand up to the truly original concoctions we'd already enjoyed. It's not its fault, really; had we tasted it first, we might've swooned.

Shots (and we mean the sipping sort) are the best method to really taste the profile of the infusions themselves. One — a jicama, chile de arbol, lime zest and cucumber infusion — tasted precisely like a Mexican salad in drink form. It was some straight Willy Wonka business, and co-owner Steve Sharma tells us there's no better hangover cure.

Next up was that famous bacon infusion, which smelled like pork fat and tasted the same. The peach was so sweet it had almost zero bite, and the cinnamon vanilla, which they mix with apple cucumber to make the Apple Pie Margarita, tasted like a cinnamon roll and finished with a heavy cinnamon bite. We tried a Bulgarian thyme infusion made possible with ingredients donated by a Bulgarian co-owner (and former member of the Red Army) and it became obvious that the only limit to Gran Malo's infusions is imagination.

Finally, we threw back a celery root infusion that I immediately declared belonged in — no, begged for — a Bloody Mary. Well fear not, says co-owner Lea McKinney — they're working on brunch. We can expect breakfast tacos and maybe even, God help us, a Michelada bar.

McKinney says that the bar eventually has plans to experiment with aged tequilas, and since her best friend is allergic to cactus, they'll try to add and keep one infused vodka, one whiskey and one rum on the menu.

Visit El Gran Malo seven days a week from 4 p.m. to midnight (soon to expand to 2 a.m.) on Ella Boulevard just outside The Heights, and keep up-to-date via their Twitter and Facebook.