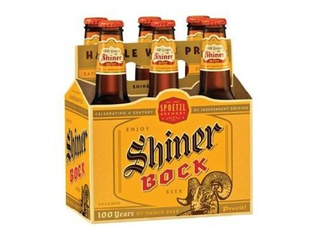 Shiner Beer is going to the bright lights of New York City. We hope they don't get too big for their britches.

Previously unavailable in the Northeast, Shiner will relieve the cravings of desperate New Yorkers on April 15, when the Texas brewery finally rolls out bottles and taps in the five boroughs.

The brewery made the announcement via Twitter on April 11:

After 104 years, Shiner Beer is coming to New York. Prosit!

In addition to New York City, Shiner will hit several counties throughout the state.

The Northeast was one of the few remaining parts of the country without distribution of Shiner or other products by Spoetzl Brewery. The six New England states do not have Shiner but will soon, according to the brewery.

Shiner is also not currently available in Idaho or Oregon, but distribution to Oregon is marked as "coming soon" as well. That leaves Idaho as the only Shiner-free state in the U.S. What's your problem, Idaho?

It seems a bit strange now — what with all the craft beers all over the state — that Shiner should be considered a craft itself, but it is. Granted, it’s the fourth-largest craft brewery in the United States and the 10th largest overall. Still, it’s the granddaddy of Texas craft beers.

It might not have the buzz of breweries like Saint Arnold in Houston or Peticolas in Dallas, but until the Texas Senate makes it a legal requirement to mention one of the two in a country song, there’s no beer better associated with Texas. (I will fight you if you say Lone Star.)

Is there a 100 percent chance that Brooklyn residents will start drinking Shiner Kosmos while listening to Willie Nelson and Hank Williams, Jr. on vinyl? Maybe not, but if you know of a better way to spend a Sunday afternoon, we would love to hear it.