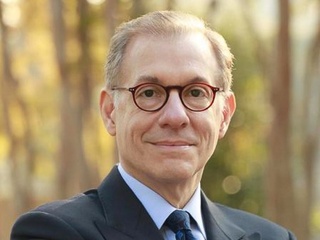 Gary Tinterow, upcoming director of the Museum of Fine Arts, Houston, will receive the Officer insignia of France's Order of Arts and Letters. Photo by F. Carter Smith

The insignia of Officer of the Order of Arts and Letters

Gary Tinterow is having a busy month . . .

Not only will he be relocating to Texas for his Feb. 1 start date as director of the Museum of Fine Arts, Houston, but he also will be receiving the prestigious Officer medal of the Ordre des Arts et des Lettres, one of France's highest cultural honor societies.

"In his career, Gary Tinterow has stood in the middle of the Atlantic, curating not only exhibitions, but creating conversations between France and America."

During his three decade tenure at the Met, Tinterow organized a string of acclaimed exhibitions focusing on the work of French masters like Manet, Ingres, and Degas. In mid 1990s, his shows Origins of Impressionism and The Private Collection of Edgar Degas both were awarded "Best Exhibition Prize” by International Association of Art Critics.

"In his career, Gary Tinterow has stood in the middle of the Atlantic, curating not only exhibitions, but creating conversations between France and America," Antonin Baudry, cultural counselor of the French Embassy, wrote in an email to CultureMap.

"There is already such a strong relationship between France and Texas," Baudry continued, citing the Menil Collection and a French education exchange with Marfa as but a few examples. "So we are incredibly excited to have such a friend of France in Texas, to continue that relationship and open a new chapter in that story."

Created in 1957, the Ordre des Arts et des Lettres (Order of Arts and Letters) was developed to recognize figures who have demonstrated a continued contribution to the enrichment of the France's cultural inheritance. Awarded twice annually to a few hundred individuals worldwide, the Order comes in three grades — the introductory rank of Chevalier (knight) followed by Officier (officer) and then Commandeur (commander).

Tinterow, who was awarded the Chevalier rank in 2003, joins a list of American cultural icons in the Order of Arts and Letters, including Paul Auster, Ornette Coleman, Jim Jarmusch, Richard Meier, Robert Redford, Meryl Streep, and Uma Thurman. Patti Smith, Bob Dylan and Clint Eastwood have made Commandeur. Current Dallas Museum of Art director Maxwell L. Anderson was given the Order's Chevalier rank in 2011.

More than a decade ago, Tinterow was admitted into France's Legion of Honor, a separate and perhaps even more distinguished society typically reserved for French nationals.

Antonin Baudry will confer the insignia of Officer of the Order of Arts and Letters on Gary Tinterow during a medal ceremony at the French Embassy's Cultural Services center in New York next Monday, Jan. 23.

Gary Tinterow, upcoming director of the Museum of Fine Arts, Houston, will receive the Officer insignia of France's Order of Arts and Letters. Photo by F. Carter Smith