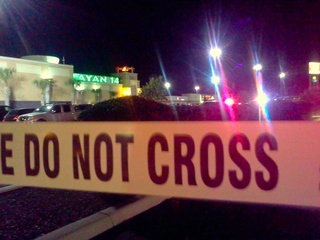 A 19-year-old man shot up a movie theater complex on Sunday, wounding one person before an off-duty police officer intervened. KABB Fox 29/Facebook

Just days after the horrific shootings at Sandy Hook Elementary in Connecticut, a 19-year-old man opened fire at a San Antonio movie theater complex late Sunday night, wounding one person before getting shot by a police officer. Both the shooter and the victim survived.

Jesus Manuel Garcia lashed out Sunday evening after his girlfriend ended their relationship, according to the San Antonio Express-News. An employee at a nearby China Garden restaurant, Garcia texted his ex with a note saying he was going to the eatery to “shoot somebody."

“We thought we were going to die,” recalled moviegoer Tara Grace, who said she locked  herself in a restroom stall to avoid the chaos.

By the time the woman read the message and called the restaurant around 9:25 p.m., Jesus was at the China Garden firing his Glock 23 at the front entrance. After chasing customers and staff out a rear exit, the shooter followed an employee through the parking lot towards the Santikos Mayan Palace theater, firing bullets into the air.

After taking out a the window of a San Antonio patrol car, Garcia shot the restaurant employee in the back as the two reached the movie theater lobby. An off-duty police officer working security at the Mayan Palace eventually cornered Garcia in a restroom, shooting him several times until she could take his gun.

Bexar County sheriff's sergeant Raymond Pollard suggested that the restaurant employee was an "easy target" rather than someone Garcia intended to harm in advance. The bullet narrowly missed the shooting victim's vital organs. He's since been released from the San Antonio Military Medical Center.

Authorities say Garcia — who remains in the hospital in stable condition — was charged with several counts of attempted capital murder.

“We thought we were going to die,” recalled moviegoer Tara Grace, who told the Express-News that she locked herself in a restroom stall to hide.

“It brings back memories of the other theater shooting (in Colorado), and the elementary school shooting,” said Cassandra Castillo, whose son works as a projectionist at the theater. “You only think the worst.”