Another Wild Twist
Bellaire socialite vindicated? Mocked for standing by her man, Stern sees all charges dropped against husband

KHOU & CultureMap
Secrets of the METRO light rail: Are you getting the most out of your stops?
LATEST NEWS
Blake Shelton and Gwen Stefani heat up Houston with drive-in concert
An Extraordinary Life 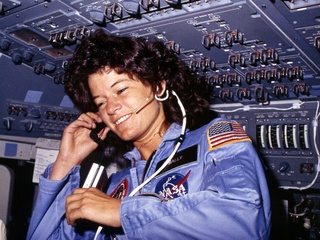 Sally Ride joined NASA in 1978 and became the first American woman to enter space in 1983. National Archives and Records Administration/Wiki

The Challenger rocketed into space on the morning of June 18, 1983. At age 32, Ride became (and still remains) the youngest American to enter space. NASA/IBTimes.com

Ride went on to teach, write and found Sally Ride Science, an organization intent on making the subject interesting to students. The Telegraph

Sally Ride — a noted physicist, a science writer and the first American woman in space — passed away at 61 on Monday, following a 17-month-long battle with pancreatic cancer.

I vividly remember learning about Ride in elementary school, being struck by her courage and the way that she stood out in photographs of the extremely-white-male-dominanted Challenger crew.

In the wake of her death, Ride's legacy seems destined to be tinged with a more personal detail. A statement published on the Sally Ride Science website quietly revealed, after a lifetime of carefully-guarded privacy, her 27-year relationship with partner Dr. Tam O'Shaughnessy.

While Ride's relationship shouldn't be reduced to a footnote in her extraordinary life, this nonchalant, posthumous "coming out" isn't the story.

This longtime bond was well-known by her friends and family — but not by the media, which has picked up on Ride's sexual orientation and examined it from every angle, with "lesbian" tossed in headlines alongside "astronaut."

But while Ride's relationship with O'Shaughnessy shouldn't be reduced to a footnote in her extraordinary life, this nonchalant, posthumous "coming out" isn't the story.

The story is that Ride's history is brimming with female firsts. That she was selected, one out of 8,000 applicants, to the NASA space program at a time when women were only barely allowed.

That Ride trained as an astronaut and made two trips to space aboard the Challenger, and then served on the panel and asked tough questions following the shuttle's horrific explosion just a few years later. That she went on to teach and write and found an organization intent on making science interesting to children, especially girls.

At a NASA news conference, in response to an onslaught of sexist comments and gender-focused questions in anticipation of her first trip to space in 1983, Ride said, "It’s too bad this is such a big deal. It’s too bad our society isn't further along."

Perhaps she would have responded the same way today.

Sally Ride joined NASA in 1978 and became the first American woman to enter space in 1983. National Archives and Records Administration/Wiki

The Challenger rocketed into space on the morning of June 18, 1983. At age 32, Ride became (and still remains) the youngest American to enter space. NASA/IBTimes.com