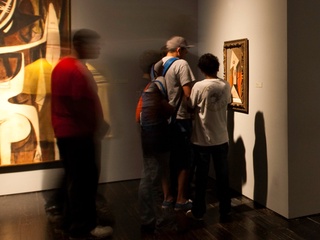 On June 13, a vandal claiming "to honor Picasso" stenciled a bull and the word "conquista" onto the 1929 piece Woman in a Red Armchair, which appears at the right of the image. Photo by J. Griffis Smith/TxDOT

Thanks to fast-acting museum security, Menil conservators have removed the gold spraypaint and expect a full recovery for the cubist work. fused00828/YouTube

Menil Collection conservators rushed to the rescue of a 1929 Pablo Picasso painting last Wednesday, after a vandal stenciled the image of a bullfighter and the word "conquista" (conquer/conquest) in gold paint on the 1929 piece titled Woman in a Red Armchair.

First reported by KPRC Channel 2 on Sunday evening, the surprise attack came to light after a witness posted a 23-second cellphone video on YouTube showing a darkly-dressed man casually stenciling the cubist painting in the Menil's surrealist galleries before stepping away from his work.

"I was texting somebody on my phone and as soon as I saw him walk towards the Picasso, I pressed the record button on my camera app," the unnamed cameraman told KPRC. "It only took one second. He spray painted it and walked off."

The assailant explained he was an up-and-coming Mexican-American artist who wanted to honor Picasso.

In an unexpected occurence, the witness told CultureMap that he ran into the vandal artist a few days later and asked him about the incident. The assailant gave him a letter detailing his motivations, which have yet to be revealed. According to KPRC, the tagger explained he was an up-and-coming Mexican-American artist who wanted to honor the modern master.

"I thought it was pretty cool how he walked up to the painting without fear, sprayed painted it and walked off," continued the eyewitness, whose face was kept offscreen during his brief interview. Others interviewees lounging in nearby Menil Park Sunday afternoon found the vandalism less cool, telling KPRC reporters that the stencil "looked ugly" and that the act desecrated Picasso's work.

The YouTube video names artist "Uriel Landeros" as the culprit along with the phrase "In Dedication to the art beast Pablo Picasso" at the bottom of the posting. Although on a much smaller scale, the Menil attack does have shades of a similar act in New York in 1974 when gallery owner Tony Shafrazi spray-painted the words "kill all lies" on Picasso's iconic Guernica at the Museum of Modern Art.

The Houston Police Department told CultureMap that its Burglary and Theft division is investigating the incident, but has yet to make any charges. While the Menil Collection was unable to comment on the crime, museum officials note that the painting looks to make it out of conservation labs as if nothing ever happened.

"Prognosis is excellent for the Picasso," Menil communications director Vance Muse told CultureMap during a Monday phone interview. "There was a quick response from security as well as our conservation department. The graffiti marks have been removed and the painting is almost fully restored, according to conservators."

One of a number of Picasso works bearing the title Woman in a Red Armchair, the museum's piece was acquired by John and Dominique de Menil in 1956. With the exception of loans to major institutions like the San Francisco Museum of Modern Art, the Metropolian Museum and Paris' Grand Palais, the painting has been on regular display at the Menil Collection's Renzo Piano-designed building since it opened in 1987.

On June 13, a vandal claiming "to honor Picasso" stenciled a bull and the word "conquista" onto the 1929 piece Woman in a Red Armchair, which appears at the right of the image. Photo by J. Griffis Smith/TxDOT