NBA Playoffs
Thunder strikes:Oklahoma City surges past Rockets into NBA semifinals
LATEST NEWS
All In: The Fight for Democracy makes case against voter suppression
Aggie might

The new Colosseum? Texas A&M's Kyle Field aims to be most intimidating sports environment ever 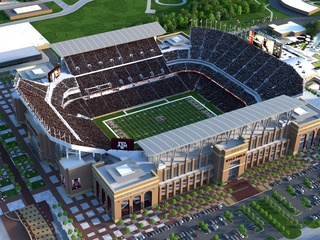 Anyone who has visited College Station has been subjected to the watchful eye of Kyle Field, which looms large over the otherwise flat landscape. The storied stadium has been called one of the most intimidating in the nation. And it's about to get even bigger and more intimidating.

On Wednesday, the Texas A&M University Board of Regents approved a $450 million expansion project that it's calling the most extensive redevelopment of a college athletic facility in history.

The Aggies will have state bragging rights, too, as the expanded Kyle Field will be larger than the 100,119-seat Darrell K. Royal Stadium at the University of Texas.

The plan calls for extensive landscaping, decorative paving and lots of bronze statues in the surrounding plazas, and the beautification of the bland grey exterior, which will be replaced by a facade of brick, glass and limestone — materials that "exude power, prominence and endurance," according to a virtual video tour (watch above).

But that's just the beginning: The field will be lowered and the stadium partially enclosed with canopies to further increase the noise level and intimidation factor of the venue. Luxury loge boxes and premium suites will be added, as well as private club and lounge areas. Plus, nearly 20,000 seats will be added, upping the capacity to 102,500 marooned-out fans.

The expansion will make Kyle Field the largest stadium in the Southeastern Conference, narrowly surpassing the University of Tennessee's Neyland Stadium, which holds 102,455.

The Aggies will have state bragging rights, too, as the expanded Kyle Field will be larger than the 100,119-seat Darrell K. Royal Stadium at the University of Texas.