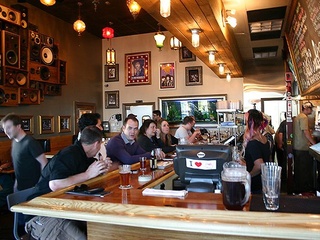 Delicious Concepts, the Heights-based restaurant group behind Lola's, Pink's Pizza, The El Cantina Superior and the Shepherd Park Draught House, announced Tuesday that it will be revamping the company's fifth concept, Witchcraft Tavern and Provision Co. The restaurant, which emerged from the Asian-fusion concept Dragon Bowl in 2012, will move away from its signature burgers in favor of a shareable plates, or, in the words of a press release announcing the move, "small, shareable and interactive dishes that are designed to invoke conversation and thought provocation."

While that phrasing might cause one to raise an eyebrow, the chef behind the transformation, former Dosi chef Jordan Asher, inspires confidence. After all, even though Dosi changed direction in May, Asher earned raves for his innovative Korean cuisine at his former post.

Asher's former post shows up in Land dishes like Korean fried quail and beef cheek galbi with kimchi. Except for a 10-ounce Texas wagyu sirloin, none of the plates on the menu are over $14.

Witchcraft's craft beer selection will remain, but the restaurant will diversify its beverage offerings with a new wine list and cocktails developed by bartender Ben Dahlstrand. Fans of Witchcraft's old menu will be able to find select items at Shepherd Park.

The new menu rolls out August 5. Hopefully, the combination of Delicious Concept's populist leanings and Asher's talent will produce a winner.