A courthouse screening
After a $65 million makeover, the historic Harris County Courthouse becomes a movie star

Stop Ashby High Rise shocked a neighbor is behind the building, vows to fight "bizarre" turn

Stop Ashby High Rise shocked a neighbor is behind the building, vows to fight "bizarre" turn

Linbeck Group has signed on as official contractors for the controversial Ashby High Rise. Photo by Karen Burd 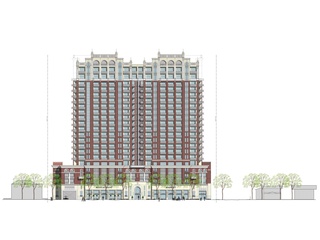 Opposition groups say they will fight the 21-story residential project as it moves forward. Rendering via Buckhead Investment Partners Inc.

The controversial Ashby high rise officially has itself a builder, as developers Buckhead Investment Partners revealed that Linbeck Group will lead the 21-story residential complex to completion by spring 2014.

Headed by executive chairman Leo Linbeck III — who actually resides just around the corner from the building site — the construction company says it hopes to mitigate the impact of the massive project when it breaks ground early next year. But that has hardly appeased the vocal neighborhood opposition.

Thursday afternoon, the Stop the Ashby High Rise Task Force sent out a mass email to its supporters:

Let us assure you that the Task Force is continuing work on a variety of fronts to stop this ill-placed project! It is bizarre and disappointing that one of our own residents would elect to participate; however, the Buckheads’ announcement provides useful clarity as to whom we are fighting."

The message reminds followers that the developers have yet to obtain approval for their site plan and the Stop Ashby movement will continue to battle the project as it moves ahead.

The builder announcement comes less that two weeks after Buckhead reapplied for building permits after construction was halted by a legal dispute led by opposition groups like Stop the Ashby High Rise Task Force claiming the 228-unit building would bring about a traffic nightmare for area residents.

"It is bizarre and disappointing that one of our own residents would elect to participate."

The Houston-based firm has worked extensively in the neighborhood, completing a number of project for Rice University, including the Brochstein Pavilion and the Bioscience Research Collaborative.

"I realize that folks may decide to attack us for our involvement," Linbeck told the Houston Chronicle.

"A lot of my neighbors are very unhappy, and I can't change that. But we really are trying to help, and I hope that they appreciate that."

In March, Mayor Annise Parker ended the two-year urban planning embroilment by declaring the city had no legal grounds to stop the project.

By April, the Stop Ashby group laid out a 15-point grassroots attack on the developers, claiming that the fight was just beginning. The organization staged a "park-in" protest in May, during which members parked 70 cars on the streets around the building site to show what traffic will look like during and after construction.

Linbeck Group has signed on as official contractors for the controversial Ashby High Rise. Photo by Karen Burd