Links we love today
Summer camp hook-ups, Arrested Development's inside jokes, weird sports and more
LATEST NEWS
Houston's 10 best chefs cook up ingenuity and creativity in 2020
and then there was one (houstonian) 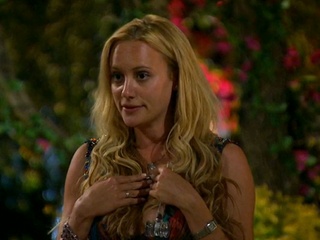 Meanwhile, Kalon and Lindzi share their feelings for the first time on air. Courtesy of ABC / Bachelor Pad

Houston reality legend Erica Rose landed herself in the limo of shame on Monday night's Bachelor Pad 3 (BP3), after getting tangled up in Michael Stagliano's clever web of deceit. But thanks to a last-minute change in the elimination rules, Rose brought Stagliano down with her in the most memorable rose ceremony of the season.

"He's a manipulator and the little puppet master lost at his own game," she said. "It's fine that people are being dishonest. That's fine. It's part of the game. I've been dishonest myself and that's fine. But I'm going to try and change things before I go . . . If this person had been the real friend I thought he was coming into this, this wouldn't have happened."

"You're so fake," Rose told Stagliano before opening up old wounds. "The smarte st thing Holly ever did was dumping you and marrying Blake."

Things got ugly as Rose brought up their time as players on the last season of Bachelor Pad, which Stagliano won with Holly Durst. Months later, Durst left him for another contestant on the show.

"You're so fake," she said, adding "crappy person" and "crappy friend" to the list. "The smartest thing Holly ever did was dumping you and marrying Blake [Julian]."

"That was the best decision she ever made. At least she's with a real man who's honest and doesn't lie."
And the BP3 cast went silent.

Rose continued her tirade in the limo, calling Stagliano a "little man."

"I'm really leaving Bachelor Pad in a better place than I found it, because I'm taking away a dictator. By removing Michael, now people's minds don't have to be brainwashed."

Love is in the air

Other than that the drama-filled elimination round, Monday's episode was all about the love.

As the number of contestants dwindles, romances are becoming paramount to staying in the game. While some couples are strategically shacking up for survival, Houston reality bad boy Kalon McMahon and the kindly Lindzi Cox are in the throes of an honest-to-goodness loving relationship after pairing up at the start of the season.

"Finding you is the most pleasant surprise I could have ever dreamed of.”

"I'm actually, possibly, maybe in love with the person I'm actually spending time with," Kalon told Lindzi on a Pretty Woman-style date that included high end jewels, a Bentley and a meal on a bridge near downtown Los Angeles.

"America didn't really get the chance to see the Kalon I've been lucky enough to get to know," she said, bringing back all those memories from McMahon's villainous stint on the recent Bachelorette. "I'm really glad that I got to see this side of you."

"You are the one thing that keeps me sane in this whole process," he told Cox. "I never in a million years thought that I would find this. Finding you is the most pleasant surprise I could have ever dreamed of.”

Damn, these are some serious words. Can't wait to see how this unfolds as the BP3 dominos continue to fall.