The Arthropologist
What it's like to be inside The Lion King: Performer spills the secrets, from puppets to stilts to that cheetah

CultureMap Exclusive
Kalon McMahon opens up on Bachelor Pad, his tabloid dispute with Erica Rose and villain life
LATEST NEWS
U.S. health agency gives the OK to take masks off if you're vaccinated
Out in the News 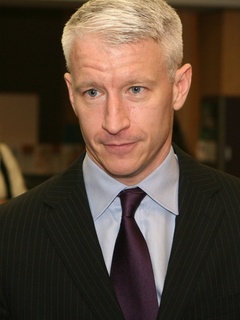 Well, hallelujah, hell froze over, y'all.

Anderson Cooper, the host of CNN's Anderson Cooper 360 and the less-noteworthy talk show, Anderson, has come out of the closet and confirmed what we all suspected/hoped for years: that he is, in fact, "gay and proud."

As if his impeccable style, Vanderbilt lineage and best friendship with comedian Kathy Griffin didn't affirm that for us about seven years ago...

"As long as a journalist shows fairness and honesty in his or her work, their private life shouldn't matter," he wrote in an open letter to his friend Andrew Sullivan of The Daily Beast.

The silver-haired newsfox has long been silent to the public about his sexuality, he says, as a matter of keeping his journalistic integrity.

"As long as a journalist shows fairness and honesty in his or her work, their private life shouldn't matter," he wrote in an open letter to his friend Andrew Sullivan of The Daily Beast.

"In a perfect world, I don't think it's anyone else's business, but I do think there is value in stand up and being counted," Cooper says. "I'm not an activist, but I am a human being, and I don't give that up by being a journalist."

The letter came just after the recent Entertainment Weekly cover story entitled "The New Art of Coming Out," featuring profiles of popular out stars like Jane Lynch, Jim Parsons, Neil Patrick Harris and Wanda Sykes who have all been very matter-of-fact in their recent announcements. No Time Magazine covers, no press conferences, no big deal.

Of course, each of those individuals are all actors who may have faced discrimination in the past, while Cooper is occasionally interviewing leaders of countries that kill homosexuals in their countries.

It will be interesting to see if or how the announcement changes his coverage of world news. Hopefully, it won't make any difference whatsoever.

Cooper's move toward the daytime talk show format proved his genuine relatability to the common American, showing us the easygoing core and sense of humor that lurk just below those piercing blue eyes and granite cheekbones.

While his duty as a newsperson won't allow him to be as vocal an ally as, say, fellow talk show host Ellen DeGeneres, it does count for a great deal that his presence can be counted in the field of broadcast journalism.

Hopefully, we can dispel that old adage that "America won't trust what they can't relate to." Because Anderson Cooper is still the same old news correspondent (and dreamboat) that he always was. He's just a little more human now.

And to that, I say, hallelujah. Now let's get back to the news.