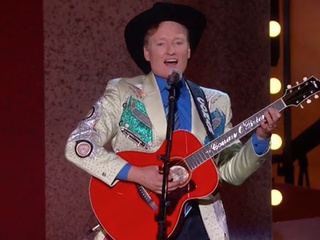 It's a big week for Dallas/Fort Worth, with the NCAA Final Four headed to the Metroplex and Conan O'Brien broadcasting his nightly talk show on TBS all week from the Majestic Theater in downtown Dallas. In Tuesday night's show, O'Brien proved he's no Jimmy Kimmel, who broadcast a series of delightful shows from Austin for a week during South by Southwest, with a lame effort that fell so flat that he had to take aim at Houston in a failed attempt to salvage the evening.

In one of the segments, O'Brien, wearing a garish western jacket that no self-respecting Texan would have anywhere close to his body, made up a song about Dallas using only Wikipedia, which our CultureMap Dallas colleague Alex Bentley noted "failed to get going until he pandered to the audience with some pointed jabs at Houston."

As the video above shows, the Dallas part is so boring (ninth largest city in USA, home to Dallas Zoo, subtropical climate, gets 37 inches of rain, zzzzzz), that Conan restorts to dissin' Houston. And that's where the song at least gets a little more interesting. Conan's sidekick Andy Richter incorrectly places the National Museum of Funeral History in Dallas, when O'Brien says, "No, Andy, that museum's in Houston."

He then continues,"Andy, you should have done your Wikipedia research. Here's what Wikipedia says about Houston."

All of it comprised of burning garbage piles,

Houston's smog is eighth worst in the USA,

And it's home to every serial killer that's alive today,

Its industries are know for pollutin'

And it's the favorite city of Vladimir Putin,

Now, here's my last line, I don't mean to be callous,

But if you drive near Houston, just keep going 'till you hit Dallas.