Looking Back, Looking Forward
2012 was a year of loss and life lessons; for 2013 I'm looking for the good — in a Mason jar
LATEST NEWS
Val documentary dives deep into life and career of Val Kilmer
Viral Video 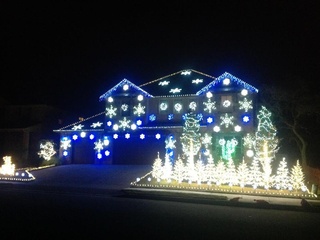 Courtesy of Listen to our Lights/Facebook

From the streets of Seoul, Korea to the suburbs of Cedar Park, Texas “Gangnam Style” has now reached a fame only the 21st century can quantify. The “Gangnam Style” YouTube video has reached over 1 billion views, making it the most viewed video on the site.

The "Gangnam Style" Listen to Our Lights video has already prompted over 700,000 views after being featured on CNN.

The song also made the perfect tune for Listen to Our Lights, an Austin home with Christmas decorations so elaborate it boasts its own website, Facebook page and YouTube channel. The "Gangnam Style" Listen to Our Lights video has already prompted over 700,000 views after being featured on CNN.

Other wacky tunes of years past have included the Angry Birds Theme Song, a techno version of "Carol of the Bells", and "Jingle Dogs", which is exactly what it sounds like.

If you want to see the Gangnam Style light show in person, you're probably out of luck. As a courtesy to their neighbors, the address of the local home is not posted online. However, most of the light shows are chronicled on their YouTube site.

But, if you’re feeling adventurous you could always pull a wise man and look into the sky for an artificial twinkling glow above Cedar Park.