CultureMap Video Tour
Texas suburban dad takes on an American-made electric car: Behind the wheel of the Chevy Volt 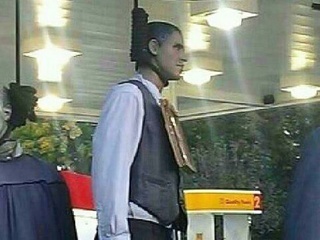 An image of the unsettling Obama doll is circulating across the Internet with a note linking it to a Sugar Land gas station. Submitted photo 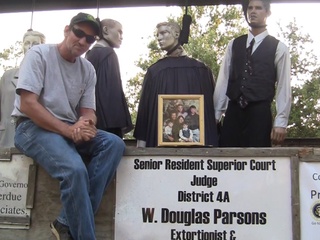 North Carolina resident V.R. Phipps created the Obama effigy as part of a larger political protest against the government for not investigating the death of a family member. Gallows of Effigy/YouTube

Many Harris County residents were appalled this election week after receiving emails and cell phone messages showing an image of a President Obama doll hanging from a noose that was purportedly taken at a Houston-area Shell station.

While the emails have turned out to be a hoax — voters in Jacksonville, Fla. received similar messages and the picture wasn't taken near Houston — the creepy effigy is quite real and, in fact, is just one of many dolls hanging from one man's bizarre protest project he calls the “Mobile Gallows.”

The creepy effigy of the President is qu ite real and, in fact, just one of many dolls hanging from one man's bizarre protest project called the “Mobile Gallows.”

The image of the doll, which has made its way across the Internet, shows the instantly-identifiable yellow overhangs of a Shell station in the background. Most pictures include a note claiming that the effigy was found at a station along "Bay Meadow Road in Sugar Land, Texas" . . . which, according to Google Maps, doesn't exist.

While it remains unclear how and when the Obama image was turned into an e-hoax, the doll undoubtedly originated with North Carolina resident V.R. Phipps, who says he created effigy to get state and federal government to investigate the shooting death of a family member.

According to KHOU Channel 11, Phipps attempted to attract attention by building a trailer equipped with gallows to hang dolls of his local sheriff and judge as well as a life-sized depiction of North Carolina governor Bev Perdue — all of whom he claims have refused to investigate the death. The President's effigy, which Phipps swears has no racist connotations, was added in recent months after the federal government refused to pursue the case as well.

Like any good American, Phipps has made sure to document the protest on YouTube. His conversation with the hanging Obama doll has garnered more than 60,000 hits.

Meanwhile, Shell Oil is understandly working to make sure everyone realizes that the only link to any of its stations with the doll is that someone took a photo of Phipps' Mobile Gallows as he put gas in his truck.

"Any time we hear of an incident such as this, we notify the appropriate law enforcement authorities," the Houston-based company said in a statement to WJAX in Florida. "We find depictions such as this to be extremely offensive and regret that the Shell image has been attached to the actions of a non-Shell affiliated individual."

An image of the unsettling Obama doll is circulating across the Internet with a note linking it to a Sugar Land gas station. Submitted photo

Go on an artsy adventure in history-rich Mansfield
Feel the sand in your toes at beachy, beautiful South Padre Island
Dig into the history and food of Temple, where town meets country